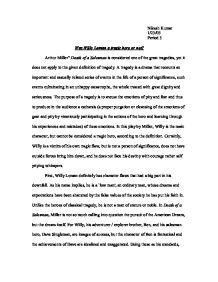 Was Willy Loman a tragic hero or not?

Nikesh Kumar 1/23/03 Period 3 Was Willy Loman a tragic hero or not? Arthur Miller" Death of a Salesman is considered one of the great tragedies, yet it does not apply to the given definition of tragedy. A tragedy is a drama that recounts an important and casually related series of events in the life of a person of significance, such events culminating in an unhappy catastrophe, the whole treated with great dignity and seriousness. The purpose of a tragedy is to arouse the emotions of pity and fear and thus to produce in the audience a catharsis (a proper purgation or cleansing of the emotions of gear and pity by vicariously participating in the actions of the hero and learning through his experiences and mistakes) of these emotions. In this play by Miller, Willy is the main character, but cannot be considered a tragic hero, according to the definition. Certainly, Willy is a victim of his own tragic flaw, but is not a person of significance, does not have outside forces bring him down, and he does not face his destiny with courage rather self pitying whimpers. ...read more.

Willy's obsession and lack of insight prevent all his relationships and cause him to betray his own set of values. His loyal and loving wife, Linda, supports him in both his fantasies and failures and her life seems to be entirely absorbed into his. Unable to achieve the desired success in his own career, he becomes preoccupied with ensuring the success of his two sons, in particular that of Biff who, he is convinced, is destined for greatness in his sporting, professional and social life. Sorrowfully, his over-zealous attempts serve only to reinforce Biff's sense of insufficiency and lack of identity. Willy realizes toward the end of the play that he does not need to `sell' himself to his family, who loves him despite his failings. Secondly, Willy Loman is not a tragic hero of Death of a Salesman because of the way he faced his destiny with self-pitying whimpers, rather than with courage and dignity. Although he wanted to succeed in life and be all he could be, he was preoccupied with his previous failures and his realization of his status in society made him think of the impossibility of the "American Dream." ...read more.

In conclusion, Willy is the main character of the play Death of a Salesman, and cannot be classified as a tragic hero according to the aforementioned definition. He is not a man of great nobility and honor. He is not highly ranked, but is 'somewhat' loved by his dysfunctional family. Yet, he makes his own mistakes that cause his downfall, but not because of an outside force. In addition, he does not face his destiny with courage and dignity rather self-pitying whimpers because he committed suicide, as he realized the truth about his life and all the miseries and failures that his life has resulted in. He made a few fatal decisions and was condemned to profound suffering because of them. This play was a great story of the aging, failing salesman who makes his living riding on a smile and a shoeshine. Arthur Miller "has given us a figure whose name has become a symbol for a kind of majestic grandiosity-and a play that compresses epic extremes of humor and anguish, promise and loss, between the four walls of an American living room." The similarities of the Loman's problems to the everyday problems that average people face make this a play full of realism. ...read more.