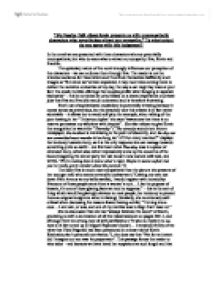 &quot;'We Need to Talk About Kevin' presents us with unsympathetic characters who nevertheless attract our sympathy.&quot; To what extent do you agree with this judgement?

"We Need to Talk About Kevin presents us with unsympathetic characters who nevertheless attract our sympathy." To what extent do you agree with this judgement? In the novel we are presented with three characters who are potentially unsympathetic, but who do seem also to attract our sympathy: Eva, Kevin and Franklin. The epistolary nature of the novel strongly influences our perception of the characters - we can only see them through Eva. The reader is not the intended audience for these letters and thus finds themselves baffled by such images as "But since we've been separated, I may most miss coming home to deliver the narrative curiosities of my day, the way a cat might lay mice at your feet: the small, humble offerings that couples proffer after foraging in separate backyards" - this is not aimed at us but based on a shared experience or private joke that Eva and Franklin would understand and is therefore frustrating. Eva's use of sophisticated vocabulary is potentially irritating because it comes across as pretentious, but the detached tone this creates is in fact rather admirable - it allows her to avoid self-pity: for example, when talking of the poor heating in her "Tinkertoy duplex" she says "awareness that there is no reserve permeates my ablutions with disquiet". She also refuses to give Kevin the recognition he wants for "Thursday" ("The atrocity sounds torn from a newspaper, the incident is minimising to the point of obscenity, and the day our son committed mass murder is too long, isn't it? For every mention?" displays her tendency towards irony, as it is the only response she can manage towards something quite so awful - we first learn what Thursday was in a piece of extended irony, which also rather impressively sums up the concerns of the book (imagining the dinner party her old house's new owners will hold, she writes, "We're raising him to know what's right. ...read more.

Their differing approaches to Kevin lead Eva and Franklin into conflict - one of the first is due to a bout of mastitis which Eva describes in the letter dated December 18th, 2000. She "started to feel draggier than usual" - she regards new motherhood as "baffling despair". She expresses her resentment at being "stuck all day with hell in a handbasket while you tooled messily off in your baby-blue pickup to window-shop for fields with the right-coloured cows" (here, the frivolity of his work (suggested particularly by "tooled merrily off", "window-shop") is contrasted with the trial of staying home with a small child ("stuck")). When he returns, she feels neglected - "I was glad you were turning into such an attentive father, but of the two other inhabitants of our loft it was only your wife who appreciated the meaning of the word hello." (the bitterness here is tangible, and interestingly she also refers to herself in the third person in another bitter remark "I suspected that if our situation were reversed... Eva would be expected to drop the scouting altogether like a hot brick."). Later in the passage, the violent language she uses to describe Franklin's treatment of her "you poked the end [of the thermometer] in my mouth, and left to change Kevin's diaper" and "...stabbed me with a back glance". Eva also resents Franklin's refusal to believe how difficult Kevin is (He cries incessantly, and that day, "Kevin had pulled off a virtuosic recital" - she uses wit as a distancing device, as usual - and she feels that he is driven by outrage at being alive, as is suggested here by "he looked deceptively content. Dreams of oblivion, perhaps."): he regards Kevin as "'crabby'", "'fussy'" and "'a little ill tempered'", and would seem to see Eva's attitude as irrational - that he begins a statement with "Listen, Eva, ...", where the use of her name and "Listen" suggest that she needs to calm down, and also says "'I believe ...read more.

Kevin is, however, attracted to nullity: as a theory for Thursday, Eva puts forward "the 'purity' he admired in the computer virus. Having registered the social compulsion to derive some broad, trenchant lesson from every asinine murder spree, he must have painstakingly parsed the prospective fallout from his own." However, as the novel progresses, both Eva and Kevin change. He becomes, by the last letter, almost normal - he "looked dwarfed ...Three days from adulthood, he's beginning to act like a little boy - confused, bereft". Eva regards his behaviour as "extraordinary", but she is changing as well, becoming "direct and motherly" in comparison to her usual cold detachment. Furthermore, he seems to have lost his interest in memorising every detail of every killing spree "Kevin remembered vaguely. 'What a sucker. Wanna know the truth, I felt sorry for the chump. He's been had.'" He has stopped trying to provide explanations of the sort he gave to the documentary makers: "'I used to think I knew,' he said glumly. 'Now I'm not so sure.'" Eva's response to this ("without thinking, I extended my hand across the table and clasped his.") is the first time since she broke his arm that she has made a spontaneous gesture towards him. Similarly, the coffin he produces for Celia's eye is the first thing he has ever really created - he is moving from destruction towards something more positive. This change in Kevin, his new vulnerability, makes him more sympathetic - he now "clung to me childishly, as he never had in childhood proper". All three characters are, despite their unsympathetic qualities, actually rather sympathetic: Kevin and Eva are so because they have developed into rather more vulnerable people and more rounded characters. Franklin did not have the opportunity to do this, but his death makes him sympathetic - "the expression on your face - it was so disappointed", creates a sense that he deserves our pity. This growth in character and the ordeals that Eva has been through means that the characters do, in fact, attract our sympathy. ...read more.