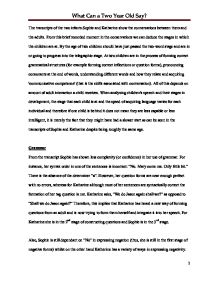 What Can a Two Year Old Say?

The transcripts of the two infants Sophie and Katharine show the conversations between them and the adults. From this brief recorded moment in the conservations we can deduce the stages in which the children are at. By the age of two children should have just passed the two-word stage and are in or going to progress into the telegraphic stage. At two children are in the process of forming correct grammatical structures (for example forming correct inflections or question forms), pronouncing consonants at the end of words, understanding different words and how they relate and acquiring 'communicative competence' (that is the skills associated with conversation). All of this depends on amount of adult interaction a child receives. When analysing children's speech and their stages in development, the stage that each child is at and the speed of acquiring language varies for each individual and therefore if one child is behind it does not mean they are less capable or less intelligent, it is merely the fact that they might have had a slower start as can be seen in the transcripts of Sophie and Katharine despite being roughly the same age. ...read more.

In comparison, Katharine has a broad semantic field of body parts. She understands and realises how each body part is connected to each other, for example she knows what comes in between her mouth and the tops of her legs and understands what it is called when the adult signals to that part of the body. However, Katharine's use of verbs is unrefined. This is evident in the fact that she says "do" - a very basic dynamic verb, instead of saying "draw". However, it does not help that the adult reinforces the verb "do" by saying it themselves when they could have said "draw." Similarly, Sophie's range of verbs in her passive speech is roughly the same; this is shown by the verbs "come" and "go" both of which are still simple. Thus, showing that they are both still in the early stages of acquiring verbs. Phonology In terms of phonology, it seems that Sophie is more developed in this area. Sophie is able to pronounce complicated consonant combinations at the beginning of words such as "th" (the) ...read more.

It is astonishing that the gap between the two children is quite large despite them being roughly the same age. However, quick judgements between them should not be made. The transcript provided is but a brief snapshot of what is a fraction of their lives and therefore it is unjustifiable to make final conclusions as to who will be more refined in their language skills. Furthermore, if a different transcript of these two children is analysed 6 months later it is possible that Sophie has caught up or even surpassed Katharine. Also, other factors influencing language development must be considered, that is the amount of adult interaction input (as stated earlier) and birth order and also the fact that this is merely a transcript and is unrepresentative of their true speech. The more siblings a child has the more adult interaction has to be shared amongst other siblings and thus less adult input is received, potentially resulting in a possibly slower development in language as opposed to those with no siblings as is the case with Katharine. In other words the quality and quantity of an adult's input is crucial to the child's development. ?? ?? ?? ?? What Can a Two Year Old Say? 1 ...read more.