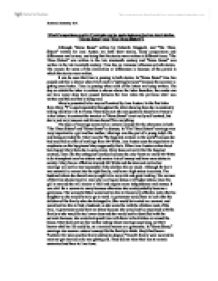 What Comparisons and/or Contrasts can be made between the two short stories, ''Horse Sense'' and ''The Three Sisters''?

What Comparisons and/or Contrasts can be made between the two short stories, ''Horse Sense'' and ''The Three Sisters''? Although ''Horse Sense'' written by Deborah Moggach, and ''The Three Sisters'' written by Jane Austen are both short stories, many comparisons and differences can be seen, one being that the stories were written at different times. ''The Three Sisters'' was written in the late nineteenth century and ''Horse Sense'' was written in the late twentieth century. Time has an immense influence on both stories. The reason for some of the similarities or differences is because of the period in which the stories were written. It can be seen that time is passing in both stories. In ''Horse Sense'' time has passed and this is shown when Eric's neck is ''getting browner'' because the summer is getting even hotter. Time is passing when each of the letters are being written. The day on which the letter is written is shown above the letter therefore, the reader can see how many days have passed between the time when the previous letter was written and the one that is being read. Mary is presented to be very self-centred by Jane Austen. In the first letter from Mary, ''I'' is used repeatedly throughout the letter showing how she is constantly talking about her life to Fanny. Mary does not ask any questions about how Fanny is in her letters. In contrast the narrator in ''Horse Sense'' is not really self-centred, but she is just very insecure and blames herself for everything. The topic of marriage seems to be a natural concept for the characters in both ''The Three Sisters'' and ''Horse Sense'' to discuss. In ''The Three Sisters'' marriage was very important to a girl and her mother. Marriage was the goal of a young lady's life and being provided for. Mary was the ''the happiest creature in the world'' because she had received an offer of marriage from Mr Watts. ...read more.

Ranjit would not really want to handle the narrator very much as he was not attracted to her. The narrator however would not mind if Ranjit conducted some physical touching. Deborah Moggach mentions how the narrator reads Woman's Own and realises that Ranjit only handles her ''infrequently.'' When you read this, the narrator sounds disappointed that her husband does not want to go near her after being married for such a short amount of time. I expect the narrator was hoping once they were married, their relationship would be full of happiness but she has been disappointed and she has no choice but to accept this. She could get a divorce but her family would not forgive her. In the Asian culture, divorce is not a very good option. When two people are married in the Asian culture, everyone expects them to live together for the rest of their lives. If something occurs and they separate many questions are asked by the family. Also when the narrator 'stroke the neck'' of the horse and it ''blew into her hair'' this conveys how she would like Ranjit to contact her in this way but he does not so she receives this comfort from the horse instead. In ''The Three Sisters'' physical touching should only occur after the marriage. It is seen as inappropriate for males to touch females a lot before the marriage at the time, which Jane Austen was writing. In ''The Three Sisters'' once the couples are married, they are supposed to have a close relationship. They should develop a close relationship because everyone expects the couple to have children so there will be an heir. In ''Horse Sense'' I expect Ranjit's family and the narrator's family would like or expect them to have children. In Asian families, having many children is part of the culture, although in modern times, the number of children has decreased. ...read more.

Deborah Moggach uses fool twice i.e. repetition to emphasise that the narrator really does feel a fool and has no self-confidence. She tells us the advantages and disadvantages of her marriage with Ranjit, as she is truthful we tend to believe her. Mary only gives us her point of view about Mr Watts and she is rather foolish and she does not even realise how foolish she really is. Therefore we tend to sympathise more with the narrator in ''Horse Sense'' rather than with Mary in ''The Three Sisters'' due to the way the writers have portrayed the characters. Deborah Moggach has written a more satisfactory conclusion to ''Horse Sense'' because we find out what has happened to her. The narrator goes back to live in London with her sister, where she came from, with her family. She has someone to talk to and she could find herself a job in London and may find some other man to spend the rest of her life with. ''Her head is clear'' and she is relieved because she realises the marriage was not a failure because of her. During the story she was always feeling lonely and depressed. There was not really any humour during the story. Deborah Moggach writes how the narrator's sister would go round the bend just living around cows and the narrator uses humour and says ''it did.'' The narrator nearly thought she was going crazy and needed help but then realised she was not going mad and she could see the funny side of what had happened in her life while being married. In contrast, Jane Austen has not given a satisfactory conclusion. We assume Mary and Mr Watts are going to marry each other because Mr Watts was going to London to ''hasten the preparations for the wedding.'' However, Mary had been changing her mind about the wedding throughout the story, so we will only know if they definitely get married once the day has occurred. Rubarani Balasothy 10A ...read more.