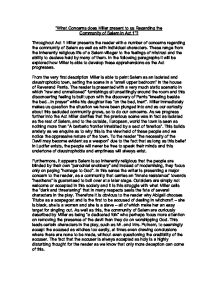 "What Concerns does Miller present to us Regarding the Community of Salem in Act 1"? Throughout Act 1 Miller presents the reader with a number of concerns regarding the community of Salem as well as with individual characters. These range from the inherently religious life of a Salem villager to the feelings of mistrust and the ability to decieve held by many of them. In the following paragraphs it will be explored how Miller is able to develop these apprehensions as the Act progresses. From the very first description Miller is able to paint Salem as an isolated and claustrophobic town, setting the scene in a "small upper bedroom" in the house of Reverend Parris. The reader is presented with a very much static scenario in which "raw and unmellowed" furnishings sit unsettlingly around the room and this disconcerting feeling is built upon with the discovery of Parris "kneeling beside the bed...in prayer" while his daughter lies "on the bed, inert". Miller immediately makes us question the situation we have been plunged into and as our curiosity about this secluded community grows, so to do our concerns. As we progress further into the Act Miller clarifies that the previous scene was in fact as isolated as the rest of Salem, and to the outside, European, world the town is seen as nothing more than "A barbaric frontier inhabited by a sect of fanatics". ...read more.

Many of the characters Miller has created seem like genuine and decent members of society at first but we soon learn that in Salem lies and pretences play a dominating role in many of their lives - not least Abigail Williams. When questioned about her suspicious "dancing" in the woods the night previous, rather than explain herself she falsely accuses Tituba of being a witch: "She makes me drink blood!". In doing this, Miller has begun to depict Abigail's true motive - saving her own life by sacrificing a friend's. Only a page later Miller reveals yet another hidden motive, this time of Mr. Putnam, by making him ask if Tituba "ever (saw) Sarah Good with (the devil)". We can clearly see that Putnam has maliciously thrown Sarah Good's name into question for reasons we can only assume are to benefit himself. The tragedy has been born with the creation of the witch hunt - all spurring from the characters' betrayal of their supposedly fellow citizens. Additionally, if we look deeper into the text we may infer that the purpose of the witch hunt is in fact not to drive the devil out of Salem but to keep its citizens oppressed and subdued - preventing them from speaking their minds. Indeed Miller puts it excellently that the witch hunt is an instrument used by the elders "to whip men into a surrender to a particular church or church state". ...read more.

However, whilst in many senses he is seen as an admirable figure, under the surface he is not all that he appears and we realise this when we are presented with his conversation with Abigail. Miller gives John Proctor a vice - lust. We are told in no unclear terms by Abigail that "You loved me, John Proctor, and whatever sin it is, you love me yet!". Recognising that Proctor has had an affair with his servant girl before the play began, the reader is shocked at the indication that perhaps nowhere in Salem is purely good. In fact, John goes on to tell Abigail that "I may think of you softly from time to time." And that he "may have looked up" at her window since, declaring a longing for her, which makes us distrust him further. These flaws represent major concerns for the reader as we expect very different attributes to what Miller presents us with in these types of characters. In conclusion, Act 1 sees Miller present us with a number of concerns, some quite obvious whilst others more subtle, that set the scene perfectly for the following Acts to come. Through a vivid use of language Miller identifies the flaws within each character whilst uncovering a general ignorance among the entire community of Salem. Whereas the men and women believe to be doing right, they are hypocritically evil in sentencing innocent people to death and this is perhaps the most important issue raised by the end of Act 1. ...read more.