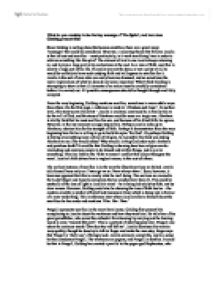 What do you consider to be the key message of 'The Spire', and how does Golding present this?

What do you consider to be the key message of 'The Spire', and how does Golding present this? Since Golding is writing about the human condition, there are a great many 'messages' that could be considered. However, a recurring theme that follows Jocelin is that of cost and sacrifice - most particularly, is it worh sacrificing lives in order to achieve something like the spire? The element of cost is one Jocelin keeps returning to, and it plays a large part in his realisations at the end. As a man of faith, sacrifice is clearly a large part of his life. If Jocelin was not the dean, or not a priest at all, he would be unlikely to have such undying faith and willingness to sacrifice for it. Jocelin is the sort of man who can easily become obsessed, and so sometimes the moral implications of what he does do not seem important. What I think Golding is attempting to show is that all elements of an action must be carefully considered before it is carried out. All possible consequences should be thought through and fully accepted. From the very beginning, Golding mentions sacrifice, sometimes in more subtle ways than others. On the first page, a reference is made to 'Abraham and Isaac'. ...read more.

He tells him of his great-grandfather, who saved the cathedral from burning by carrying out the burning wood in arms 'roasted like pork'. This is a portent of what happens later. Pangall also utters the ominous words 'One day they will kill me'. Jocelin dismisses his worries very quickly, though he does try to talk to Roger and make the men stop. Roger says that Pangall is 'their way' of bringin luck. Jocelin seems to accept this, and in a sense he then condemns Pangall. The workemn are pagans, and Pangall is disables. It could be that in Pangall, Golding has created a parallel to the pagan god Hephaestus, who was impotent and married to Aphrodite. Aphrodite, like Goody, had an affair with another man, and Hephaestus was taunted by the other gods in a similar way to Pangall. In some ways, Pangall's death is the most important event of the novel, though it is not actually made explicit. Jocelin does not know whether Goody consented to the death, and this comes to plague him later. The scene where he is killed is thick with symbolism. The workmen become bestial and animal-like, Goody is shown dishevelled with 'a hand-torn slit' in her dress, possibly to display her adultery. ...read more.

At first he says 'my back...Him. Her. Thou', referring to his consumption, Pangall, Goody and God. He seems to recognise that these things were not worth trading for the spire. In the very last chapter, he exclaims to himself 'I traded a stone hammer for four people'. It does not seem that he is referring to God now. He talks about 'bogus sanctity' to Roger, so it seems he has not lost his faith, but instead believes that he never really had it. He speaks of religion as a 'jewel...to be taken out and worn on feast days'. The 'four people' he refers to could be himself, Pangall, Goody and Roger, because by the end Rover has attempted suicide and his life is ruined. By referring to the spire as a 'stone hammer', Golding is showing how its worth has dramatically decreased when compared to the lives it has cost. Though Golding was a religious man, I consider this novel to be quite critical of Christianity. The message that you should not blindly sacrifice anything for your faith goes against the teaching that God rewards unwavering belief. The story of Abraham and Isaac seems to resonate throughout The Spire, and it can be taken to mean several different things. It seems that one of the many themes and ideas Golding explores in this text is the cost of faith. ...read more.