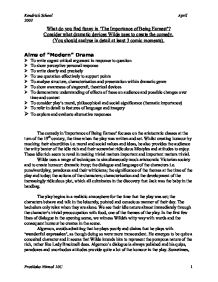 What do you find funny in 'The Importance of Being Earnest'?Consider what dramatic devices Wilde uses to create the comedy.(You should analyse in detail at least 3 comic moments).

What do you find funny in 'The Importance of Being Earnest'? Consider what dramatic devices Wilde uses to create the comedy. (You should analyse in detail at least 3 comic moments). Aims of "Modern" Drama > To write cogent critical argument in response to question > To show perceptive personal response > To write clearly and precisely > To use quotation effectively to support points > To analyse structure, characterisation and presentation within dramatic genre > To show awareness of stagecraft, theatrical devices > To demonstrate understanding of effects of these on audience and possible changes over time and context > To consider play's moral, philosophical and social significance (thematic importance) > To refer in detail to features of language and imagery > To explore and evaluate alternative responses The comedy in 'Importance of Being Earnest' focuses on the aristocratic classes at the turn of the 19th century, the time when the play was written and set. Whilst creating humour by mocking their absurdities i.e. moral and social values and ideas, he also provides the audience the witty banter of the idle rich and their somewhat ridiculous lifestyles and attitudes to enjoy. These idle rich seem to revel in making trivial matters important and important matters trivial. Wilde uses a range of techniques to simultaneously mock aristocratic Victorian society and to create humour: dramatic irony; the dialogue and language of the characters i.e. puns/wordplay, paradoxes and their witticisms; the significance of the themes at the time of the play and today; the actions of the characters; characterisation and the development of the increasingly ridiculous plot, which all culminates in the discovery that Jack was the baby in the handbag. The play begins in a realistic atmosphere for the time that the play was set; the characters behave and talk in the leisurely, pointed and conscious manner of their day. The bachelors only relax when they are alone. ...read more.

What we might find particularly funny is how Algernon demands Jack to 'produce (his) explanation and pray make it improbable', because this cannot be done. Algernon's sarcastic response, 'How immensely you must amuse them!' to Jack's long-winded talk about the differences between the country and the town and who he amuses others, is another thing that we find funny. In this scene, Jack not only exposes himself as having a dual identity - one of the themes of the play - but also as a hypocrite when he says, 'When one is placed in the position of guardian, one has to adopt a high moral tone on all subjects' because he has just demonstrated that the opposite is true in his case. We are amused when Algernon declares to Jack, 'you look as if your name was Ernest. You are the most earnest looking person I ever saw in my life', because surely it is ridiculous for a person to suit their name. Wilde continues the humour using the pun in the title. In this speech from Algernon, the repeated use of 'Ernest' highlights everything. It brings our attention to the importance of the title and how the whole play pivots around the word 'earnest'. Also, 'Ernest' begins to sound wrong, like any word that is repeated does. The talk of dual identities leads to talk about the ludicrous concept of Bunbury, which can be interpreted as having homosexual implications. The mere idea of having this dual identity or alter ego seems totally ridiculous to us yet it is important to these characters and the whole play. Of these two, Jack seems to use this as an excuse for attending to his romantic life. We might see an interesting contrast of how Jack, a man, can come and go as he pleases where as Cecily, a woman, has to go to arguably more ridiculous lengths to pursue a romantic life. ...read more.

After this Wilde's skill in structuring becomes apparent because the railway line being 'immaterial', originally a quip to create humour turns out to be crucial information in discovering Jack's origins. It is humorous that Miss Prism remembers the bag's appearance and also what she did with the manuscripts at the time of the misplacement but not the baby. Wilde adds to the humour when Jack exclaims, 'Mother', in reference to Miss Prism. We find the silly coincidence that Jack happens to have the Arm Lists at hand funny but what is even more hilarious is his explanation that, 'These delightful records should have been my constant study'. After the excitement of Jack's far-fetched origins the characters pair off - this seems to be an anti-climax to the play. Although Wilde does start to prepare us for the traditional pairing-off ending, we are still surprised because Wilde presents us with a typical ending where as everything else in the play is far from this - be it the twists of clich�s or the characters' attitudes, both of which we have become accustomed to by the end. We are also left to ponder the coincidence of the ending and to ponder the relevance of the title which Jack relates to in the closing lines of the play, 'I've now realized for the first time in my life the vital Importance of Being Earnest'. We find Jack's view that 'it is a terrible thing for a man to find out suddenly that all his life he has been speaking nothing but the truth', comical as well - it is not what we would expect someone to say in the same unlikely situation. Everything from the duration of the play explodes into a fast-paced, absurd ending after Miss Prism's entrance, the implausibility of which we choose to overlook because it is simply ridiculous, just like the whole plot of the play. Nevertheless, Wilde's various techniques to create humour make the play a delightful comedy of manners. ?? ?? ?? ?? Kendrick School April 2003 1 Pratiksha Nirmal 10C ...read more.