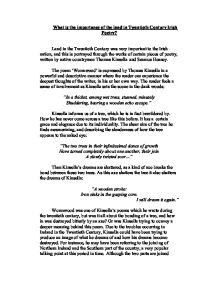 What is the importance of the land in Twentieth Century Irish Poetry?

What is the importance of the land in Twentieth Century Irish Poetry? Land in the Twentieth Century was very important to the Irish nation, and this is portrayed through the works of certain pieces of poetry, written by native countrymen Thomas Kinsella and Seamus Heaney. The poem 'Wormwood' is expressed by Thomas Kinsella in a powerful and descriptive manner where the reader can experience the deepest thoughts of the writer, in his or her own way. The reader feels a sense of involvement as Kinsella sets the scene in the dank woods: "In a thicket, among wet trees, stunned, minutely Shuddering, hearing a wooden echo escape." Kinsella informs us of a tree, which he is in fact bewildered by. How he has never come across a tree like this before. It has a certain grace and elegance due to its individuality. The sheer size of the tree he finds mesmerizing, and describing the slenderness of how the tree appears to the naked eye: ...read more.

Although the two parts are joined together, they attitudes are very dissimilar. As the IRA intervene, and cause even more controversy the country's become even more separated, (the trees being separated by the axe). "Between my finger and thumb The squat pen rests; snug as a gun." This quotation refers to Seamus Heaney's poem, 'Digging'. It immediately refers to Heaney's poetical setup, but when it refers to being snug as a gun. Maybe he is letting us in to the secrets of his country and how crime and violence around the time of his work was a focal point among the citizens of Ireland. The descriptive nature of his poem brings the reader close to the poem in a sense of involvement. This is similar to Kinsella's poem which was referred to earlier. He is very proud of his family and his family's predecessors. ...read more.

He is not the write man for the job. This was not a regular scenario in the Twentieth Century, as farmers usually passed down their land to the next generation in their family: "But I've no spade to follow men like them" He then exclaims that he still has a love for farming, but not in the physical way. He wants to write about the importance of the land to the Irish people, and how this will make a change as this will be his way of farming: "Between my finger and my thumb The squat pen rests. I'll dig with it." As we have seen from both these poems, land is a very important part of life to the Irish nation. Although the land is the focal point in the poems, when looked at in a deeper meaning twentieth century life in Ireland shines through the surface of the poem. The graphical images conveyed through these poems give us a sense of involvement and in these cases bring us closer to the poem. ...read more.

This essay response is directed a question which asks candidate to consider the importance of agriculture to Ireland in the Twentieth Century. The candidate makes a very focused response and covers a range of detail in the poems, though, for ...

This essay response is directed a question which asks candidate to consider the importance of agriculture to Ireland in the Twentieth Century. The candidate makes a very focused response and covers a range of detail in the poems, though, for an A Level response, I would argue there is not enough. A lot of topics are covered, but not in sufficient depth. There is evidence of knowledge of both plays but there appears to be a problem in linking the poetic devices and techniques used by Kinsella and Heaney to the proposed question until the last paragraph. This is not a bad thing, but it limits the focus on the question as it does not become explicit that the candidate is consistently focusing on the question.

The Level of Analysis is fair, but their is not quite enough to gain much higher than high C grade for GCSE. Every comment made is valid, but the simple thing that'll improve this answer is if the candidate just gave more. There is a good understanding of metaphorical themes used in 'Wormwood', with the candidate citing the IRA representing the "iron blade". What could be commented further on though, is how the word is severed apart by a man-made object - what does this say about the representation of nature and Ireland before the inclusion of the IRA's weaponry? What can be said by the fact that the poem is only about a dream? What about the fact that the blade does not appear until the very end of the poem? Does this say anything about the closeness of unity before the IRA stood for independence? This is the level of analysis that should be seen in an A Level answer, observing how the structure and language create images both metaphorical and literal in the readers' heads.
The analysis of 'Digging' is slightly unconvincing at first. It would be good for candidates to note that it is not a good idea to propose a question to the examiners unless you intend to answer it shortly afterwards or at some times during the essay; candidates are meant to be answering the examiners' question and so rhetoric might be good in creative writing tasks, but certainly not for analytical writing.

The Quality of Written Communication, for the most-part, is as should be expected of an A Level candidate. There is a good adherence to English standards although it would be best if candidates avoided colloquialisms such as "letting us in to the secrets". A better phrase might be "creating an implicit link with" or simply "revealing".