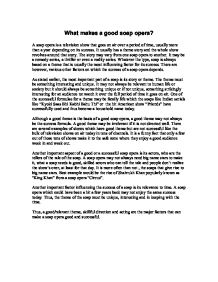 What makes a good soap opera?

What makes a good soap opera? A soap opera is a television show that goes on air over a period of time, usually more than a year depending on its success. It usually has a theme story and the whole show revolves around that story. The story may vary from one soap opera to another. It may be a comedy series, a thriller or even a reality series. Whatever the type, soap is always based on a theme that is usually the most influencing factor for its success. There are however, various other factors on which the success of a soap opera depends. ...read more.

One of the successful formulae for a theme may be family life which the soaps like Indian serials like "Kyoki Saas Bhi Kabhi Bahu Thi" or the hit American show "Friends" have successfully used and thus become a household name today. Although a good theme is the basis of a good soap opera, a good theme may not always be the success formula. A good theme may be irrelevant if it is not directed well. There are several examples of shows which have good theme but are not successful like the bulk of television shows on air today in tens of channels. ...read more.

It is more often than not , the soaps that give rise to big name stars. Best example would be the rise of Shahrukh Khan popularly known as "King Khan" from a soap opera "Circus". Another important factor influencing the success of a soap is its relevance to time. A soap opera which could have been a hit a few years back may not enjoy the same success today. Thus, the theme of the soap must be unique, interesting and in keeping with the time. Thus, a good/relevant theme, skillful direction and acting are the major factors that can make a soap opera good and successful. ...read more.