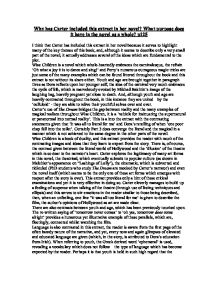 What purpose does p125 have to the novel Wise Children?

Why has Carter included this extract in her novel? What purpose does it have in the novel as a whole? p125 I think that Carter has included this extract in her novel because it serves to highlight many of the key themes of this book, and, although it seems to describe only a very small part of the novel, it actually addresses several of the ideas which are fundamental to the plot. Wise Children is a novel which whole-heartedly embraces the carnivalesque, the refrain 'Oh what a joy it is to dance and sing!' and Perry's numerous outrageous magic tricks are just some of the many examples which can be found littered throughout the book and this extract is not without its share either. Youth and age are brought together in paragraph three as Dora reflects upon her younger self, the idea of the carnival very much embraces the cycle of life, which is marvelously evoked by Mikhail Bakhtin's image of the laughing hag, heavily pregnant yet close to death. ...read more.

There is, of course, the contrast given between the literal world of Hollywood and the 'illusion' of the theatre which is so dear to the narrator's heart. Carter explores the legitimacy of many art forms in this novel, the theatrical, which eventually submits to popular culture (as shown in Melchior's appearance on "Lashings of Lolly'), the cinematic, which is subverted and ridiculed (PhD students who study The Dream are mocked by Carter's narrator) and even the novel itself (which seems to be the only one of these art forms which emerges with respect after the story is over). This extract provides only a hint of these critical examinations and yet it is very effective in doing so. Carter cleverly manages to build up a feeling of suspense when talking of the theatre (through use of listing techniques and ellipsis) and this serves to stir emotions in the reader similar to those being described, then, when an unfeeling, one line "it was all too literal for me' is given to describe the film, the author's opinions of Hollywood as art are made clear. ...read more.

Another aspect of this novel which cannot be escaped from is Shakespeare, he permeates the novel in a way that no other theme does. This extract does contain some allusion to Shakespeare, namely A Midsummer Night's Dream, through the mention of The Dream and the quote 'You spotted snakes with double tongue, thorny hedgehogs, be not seen'. Admittedly these example are not representative of some the more complex ways in which Carter weaves Shakespeare into the fabric of this book, but they do serve to show some of the sheer volume of allusion which is casually dropped into the story. This extract highlights and expands upon many of the key ideas which run through this book and I feel that is the main reason why it has been included in the novel. It's colloquial style continues to further pull the reader into an intimate relationship with the narrative and elements of magical realism serve to test the strength of their willing suspension of disbelief. ...read more.