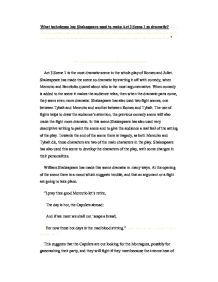 What techniques has Shakespeare used to make Act 3 Scene 1 so dramatic? azrudin, please do not redistribute this work. We work very hard to create this website, and we trust our visitors to respect it for the good of other students. Please, do not circulate this work elsewhere on the internet. Anybody found doing so will be permanently banned." Visit coursework ff in ff fo ff for ff more essay ff Do ff not ff redistribute Act 3 Scene 1 is the most dramatic scene in the whole play of Romeo and Juliet. Shakespeare has made the scene so dramatic by starting it off with comedy, when Mercutio and Benvlolio quarrel about who is the most argumentative. When comedy is added to the scene it makes the audience relax, then when the dramatic parts come, they seem even more dramatic. Shakespeare has also used two fight scenes, one between Tybalt and Mercutio and another between Romeo and Tybalt. The use of fights helps to draw the audience's attention, the previous comedy scene will also make the fight more dramatic. In this scene Shakespeare has also used very descriptive writing to paint the scene and to give the audience a real feel of the setting of the play. Towards the end of the scene there is tragedy, as both Mercutio and Tybalt die, these characters are two of the main characters in the play. Shakespeare has also used this scene to develop the characters of the play, with some changes in their personalities. William Shakespeare has made this scene dramatic in many ways. ...read more.

This is a consequence because if Romeo had not been banished then Juliet would not have needed to obtain the potion, which made her appear dead, but the message failed to reach Romeo. At the end of the play, both of the families have lost their children, and are upset. "As rich shall Romeo's by his Lady's lie, Poor sacrifices of our enmity" Capulet says realising what has happened. The families end their feud because there is nothing to fight over, and have already lost loved ones. This is a consequence from Act 3 Scene 1 because Romeo was banished, meaning that Juliet had to fake her death, and Romeo did not receive the message and kills himself, as does Juliet when she finds Romeo dead. This brought the two families together, realising the two had been married. Resulting in the families ending their feud. Overall Act 3 Scene 1 is the most dramatic and one of the most important scenes in the whole play of Romeo and Juliet. Shakespeare has used comedy, making the audience relax, then introducing action and drama in the form of two fight scenes, and because the audience is relaxed the fights seem more dramatic. William Shakespeare has also used very descriptive language to set the scene of the play. This scene is almost in the middle of the play, so Shakespeare has used this point to change the plot, as the prince orders Romeo's banishment. azrudin. Thus, we can say that whilst this represents a progression, in the end we have come no closer to any "real" knowledge. this coursework was downloaded from Coursework.info. Redistribution prohibited. (c) 2004-2006 Student Media Services Limited. Redistribution and retransmission explicitly prohibited. ...read more.