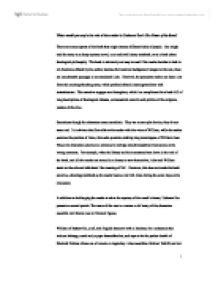 What would you say is the role of the reader in Umberto Ecos The Name of the Rose?

What would you say is the role of the reader in Umberto Eco's The Name of the Rose? There are many aspects of the book that might interest different kinds of people. One might read the story as a cheap mystery novel, as a medieval history textbook, or as a book about theological philosophy. The book is obviously not easy to read if the reader decides to look in all directions offered by the author, besides the historical background integral to the tale, there are considerable passages in un-translated Latin. However, the persistent reader can learn a lot from this exciting/shocking story, which perfectly blends learning/erudition with entertainment. The narrative engages one throughout, which is a compliment for a book full of long descriptions of theological debates, ecclesiastical councils and politics of the religious leaders of the time. Sometimes though the characters seem unrealistic. They are a mere plot device; they do not seem real. It is obvious that Eco talks to the reader with the voice of William, while the reader assumes the position of Adso, who asks questions making long monologues of William clear. These two characters also have a tendency to indulge into philosophical discussions at the wrong moments. ...read more.

The historical background helps clarify the plot, but it also reveals how history repeats itself. Each period has its orthodoxy and its heresies, which may well change places in the succeeding age. Indeed, at any moment it may not be clear which is which. When Nicholas of Morimondo says he would be willing to destroy those who are the ''enemies of the people of God'' William asks, ''But who today is the enemy of the people of God? Louis the Emperor or John the Pope? Michael Cunningham discusses Reflections on The Name of the Rose in his Essential Collection: "Books always speak of other books, and every story tells a story that has already been told", he explains. Michael is saying Eco's story would be a narrative on fourth level of encasement, inside three other narratives. "I am saying what Vallet said that Mabillon said that Adso said....". This again reveals Eco's multi-layered method of construction, his skills as a storyteller. He wants to make his readers work, to draw them in and make them work hard, think for themselves, but all the time entertaining and thought provoking. ...read more.

Capozzi is embounded in Praise of Eco's works and he is right in celebrating Eco's skills as a superior storyteller. He gives ample and generous descriptions of Eco's rich and diverse use of complicated devices, which are indeed in the hand of a master. He also alludes to labyrinths and architecture and the belief and journey towards discovery. It is the lessons learned and the enrichment of that journey which is more important than the journey's end or any conclusion. The Name of the Rose allows the reader to be drawn into the book in a mysterious labyrinth of spiritual intrigue and politic. The murders and the protagonist alongside Adso and William of Baskerville make a complex, exciting mystery/detective tale interwoven with medieval intrigue and sensibilities. The reader is allowed to make deductions as to the truth about the murders and the reasons for them eventually revealed. The readers are expected to investigate themselves in an attempt to reveal the truth. However, despite the mystery remaining partially cloaked the reader is never cheated. Whilst many mysteries are answered the ultimate one involving a deep secret of faith and philosophy should remain an ancient secret. The reader is therefore given many roles and is free to enjoy them depending on their own literary history, traditions and cultures and background. ...read more.