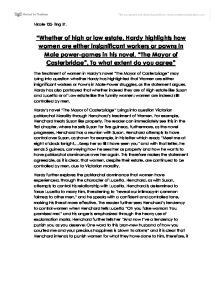 “Whether of high or low estate, Hardy highlights how women are either insignificant workers or pawns in Male power-games in his novel, “The Mayor of Casterbridge”. To what extent do you agree”

The treatment of women in Hardy’s novel “The Mayor of Casterbridge” may bring into question whether Hardy has highlighted that Women are either insignificant workers or Pawns in Male-Power struggles, as the statement argues. Hardy has also portrayed that whether indeed they are of High estate like Susan and Lucetta or of Low estate like the furmity women; women are indeed still controlled by men.

Hardy’s novel “The Mayor of Casterbridge” brings into question Victorian patriarchal Morality through Henchard’s treatment of Women. For example, Henchard treats Susan like property. The reader can immediately see this in the first chapter, where he sells Susan for five guineas. Furthermore, as the novel progresses, Henchard has a reunion with Susan. Henchard attempts to have control over Susan, as shown for example, in his letter which reads “Meet me at eight o’clock tonight….Keep her so till I have seen you” and with that letter, he sends 5 guineas, conveying how he sees her as property and how he wants to have patriarchal dominance over her again. This therefore makes the statement agreeable, as it is clear, that women, despite their estate, are continued to be controlled by men, due to Victorian morality.

Hardy further explores the patriarchal dominance that women have experienced, through the character of Lucetta. Henchard, as with Susan, attempts to control his relationship with Lucetta. Henchard is determined to force Lucetta to marry him, threatening to “reveal our intimacy-in common fairness to other men,” and he speaks with a confident and controlled tone, making his threat more effective. The reader further sees Henchard’s tendency to control women when Henchard tells Lucetta “Oh you false woman! You promised me!” and his anger is emphasized through the heavy use of exclamation marks. Henchard further tells her “And now I’ve a tendency to punish you as you deserve! One word to this bran-new husband of how you courted me and your precious happiness is blown to atoms” and it is clear that Henchard intends to punish women for what they have done to him, therefore, it further makes the statement agreeable, as Hardy has indeed highlighted that women are insignificant in male power-struggles in the novel.

Hardy has also highlighted how women can be in a more subordinate position in male power-games through Elizabeth-Jane. Elizabeth-Jane has clearly been subjected to the same domination as her mother and Lucetta since her meeting with her stepfather. One clear example of this is when Henchard tries to force Elizabeth-Jane to take his surname. He says “one word more, Elizabeth, You’ll take my surname now-hey?” and it is clear through his question that he is concerned with his public persona, therefore, a reason why he wants Elizabeth to take his surname. It is a means for Henchard to yet again, control women, and to control the situation. Furthermore, Henchard asks Elizabeth-Jane to no longer see Farfrae, and her response “Yes. If you much wish it” shows how women in Victorian times where expected to be obedient to males, and therefore, Hardy has clearly highlighted how women are indeed insignificant workers, or Pawns in male power-games.

However, on the other hand, Hardy has portrayed how women have learnt to manipulate men and their social image to their own ends. The reader can see this particularly through the character of Lucetta. She has manipulated and concealed the truth. For example, in one of her early letters she writes “I thus look upon the whole as a misfortune of mine and not a fault of yours. So that Michael, I must ask you to overlook those letters with which I pestered you day after day in the heat of my feelings”, and this clearly evokes that her reputation is in ruins. Her response to that shows how she has learnt the values, and knows that if she breaks them, there will be social repercussions, therefore, she only asks for the letters to protect herself from being publically humiliated. Yet, as her character further highlights, there are dire risks involved in manipulating men and her own social image, as she is ultimately destroyed by the skimmity ride, “falling to the floor in a fit of epileptic seizures”, and therefore, the statement is undermined through the fact that women have indeed learnt to manipulate as a result of patriarchal Victorian morality.

Hardy further explores how women have manipulated men and their own social image through the character of Susan. Like Lucetta, Susan has concealed the truth, withholding a dark secret. Hardy creates an air of mystery, building tension when he writes “She had directed it in these words- Mr. Michael Henchard. Not to be opened until Elizabeth-Jane’s wedding day”. This clearly shows that Susan has manipulated Henchard, through writing in the letter what she has kept to herself, and this is further emphasized through the use of imperative on her instructions on the envelope. Furthermore, Susan’s final words “ Tell her husband of this or not, as you may judge; and forgive, if you can, a woman you once deeply wronged, as she forgives you,” shows how she has manipulated a man who has deeply wronged her, therefore, showing that women will not be insignificant workers or pawns in male power-games.

Finally, whilst the novel has brought into question Victorian morality, Feminist critics might also question Hardy’s aesthetic-oriented descriptions of the female characters as revealing his underlying sexism. For example, he describes Lucetta’s appearance as an “artistic perfection” focusing largely on her looks. Furthermore Hardy writes of Elizabeth “ We now see her in a black silk bonnet, velvet mantle, or silk Spencer…” and his narrative of female characters  remains aesthetically-oriented. This reveals how Victorian Women were expected to look perfect and their looks where symbolic of their estate. Therefore, feminists might argue that Hardy’s aesthetic-oriented narrative of women is degrading in itself; therefore, he remains collusive with Victorian morality. This parallels to how Lucetta’s fit adheres to the Victorian vision of women as being emotionally weak and even melodramatic.