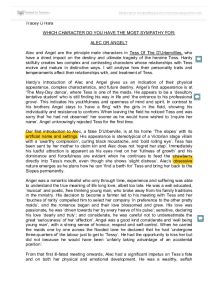 Which Character in Hardy's &quot;Tess Of The D'Urbervilles&quot; Do You Have the Most Sympathy For: Alec or Angel?

Tracey O'Hara WHICH CHARACTER DO YOU HAVE THE MOST SYMPATHY FOR: ALEC OR ANGEL? Alec and Angel are the principle male characters in Tess Of The D'Urbervillles, who have a direct impact on the destiny and ultimate tragedy of the heroine Tess. Hardy skilfully creates two complex and contrasting characters whose relationships with Tess evolve and mature in distinctive ways. I will analyse how their personality traits and temperaments affect their relationships with, and treatment of Tess. Hardy's introduction of Alec and Angel gives us an indication of their physical appearance, complex characteristics, and future destiny. Angel's first appearance is at 'The May-Day dance', where Tess is one of the maids. He appears to be a 'desultory tentative student' who is still finding his way in life and 'the entrance to his professional grove'. This indicates his youthfulness and openness of mind and spirit. In contrast to his brothers Angel stays to 'have a fling' with the girls in the field, showing his individuality and resistance to conform. When leaving the field he noticed Tess and was sorry that 'he had not observed' her sooner as he would have wished to 'inquire her name'. Angel unknowingly rejected Tess for the first time. Our first introduction to Alec, a false D'Urberville, is at his home 'The slopes' with its artificial name and settings. ...read more.

He was impatient and her rejection of him 'for near three mortal months' led to him taking advantage of her when the opportunity arose. He stole her innocence and purity with his selfish and cruel animalistic self-gratification and left her to cope with the depression and 'Sorrow' caused by his actions. He exploited and manipulated Tess and became 'the blood-red ray in the spectrum of her young life', causing her irreparable damage that would plague her future. Alec did portray some redeeming qualities; he became repentant of his sinful and lustful past and became a Christian Preacher. On learning 'what had resulted' from his fornication with Tess, he offered to marry her. He was charming and impulsive and consistent in offering Tess financial help and assistance. Alec was honest and readily admitted to being a 'bad fellow' and a 'wretch' and can be admired for his open attitude and self-awareness. However, his all consummated passion and desire for a woman who would never reciprocate his feelings drove his actions, his abuse, blackmail and obsession to possess her under any circumstances led to his ultimate and justifiable down fall. Angel's stubborn persistence in obtaining Tess's hand in marriage and its consequences revealed many contradictions in his character. He declared he loved Tess for 'herself', her 'soul', her 'heart' and her 'substance', yet wanted to educate her. ...read more.

Love can be defined as 'a warm liking of affection, sexual passion, a loved person. From this it is possible to deduce that both men loved Tess, Alec with 'sexual passion' and Angel with 'a warm liking or affection'. A 'loved person' however would not be some one that you would hurt emotionally or physically. Both men inflicted pain and suffering on Tess and this was something that she became aware of, even telling Alec when referring to the farmer, 'He won't hurt me. He's not in love with me'. Neither of the men fully understood or appreciated Tess, she was abused by Alec's cruelty for lust and deserted by the fragility of Angel's 'ethereal' love but it was Alec's treatment of Tess that led to Angel's desertion. Alec and Angel's actions from the beginning to the end of the novel significantly shaped Tess's life; from an innocent and pure existence to a desolate and depressed one. Alec, the more obvious villain, destroyed any hope of future happiness for Tess; he manipulated and ensnared her throughout. Angel was profound in his destruction, unable to accept Tess's faults and deserting her without consideration for her feelings; but it was Angel that bought Tess the happiest times in her short and tragic life. It is with Angel that I have more sympathy, if Tess could find it in her heart to forgive him, then so can I. ...read more.

A persuasively argued essay which makes effective use of frequent brief quotation from the text. It could be further improved by more reference to actual incidents in the novel, and by an exploration of how Tess's responses together with Hardy's authorial comments might contribute to shaping the reader's response to the two male characters.

A good focus overall on Alec and Angel, with each paragraph clearly considering different aspect of the characters' personalities. The writer never strays from the question at hand, which shows a clear level of understanding as to what the question ...

A good focus overall on Alec and Angel, with each paragraph clearly considering different aspect of the characters' personalities. The writer never strays from the question at hand, which shows a clear level of understanding as to what the question was asking. The writer could have included a paragraph or two considering Alec and Angel together Ã¢â‚¬â€œ this would show the reader that they are able to make connections between characters and evaluate them against one another, a high-level skill. Topic sentences are used well and the essay is structurally coherent.

The writer shows a good knowledge of the text through the use of frequent embedded quotations and goes some way to analysing these quotes by explaining their meaning and offering one interpretation. Embedded quotations are good to use as they give an essay more fluency than a point-quote-analysis approach, which can often seem disjointed. However, they rarely extend this analysis to an evaluation and often do not consider other interpretations. For example, the line Ã¢â‚¬Å“became Ã¢â‚¬Ëœthe blood-red ray in the spectrum of her young life'Ã¢â‚¬Â could have been significantly expanded in terms of language analysis Ã¢â‚¬â€œ what does the choice of colour imagery say about the narrator's sympathy for Alec and how does it influence your own ideas about him?Alternative interpretations are key to writing a high quality answer Ã¢â‚¬â€œ they show the examiner that you have considered a range of what something could mean as well as what you think it means. Evaluation is therefore easier to insert as the writer can explain why these interpretations are likely or unlikely. For the above quote the writer could have evaluated the effectiveness of the use of vivid colour imagery in altering the reader's perspective on Alec Ã¢â‚¬â€œ and this can be an entirely personal response (just keep it in the 3rd person).
Paragraphs 5 and 6 do provide a clear balancing of ideas, which is important since it does show a consideration of alternative perspectives, and the writer occasionally offers some evaluation of whether speech can be taken at face value and in the conclusion judging Alec to be Ã¢â‚¬Å“the more obvious villainÃ¢â‚¬Â. The overall conclusion makes a decision as to the extent of sympathy, effectively answering the question.
However, throughout the essay the writer does not continuously give his own judgement about how each piece of evidence contributes towards his/her own feelings of sympathy Ã¢â‚¬â€œ they write, Ã¢â‚¬Å“justifiable down fallÃ¢â‚¬Â as though they have already made up their mind without explicitly saying why. Perhaps at the end of each paragraph or set of points they could relate this back to how the points affect their sympathy for the characters, which clearly signposts to a reader that the writer has included evaluation and gone further than a mechanical response, considering the text personally. Also, sometimes it feels as though the writer is just giving us an account of events in the novel. This will score few or no marks in an exam or coursework as it doesn't display any level of understanding of the text, just that the writer knows what happens (and this could have been through a synopsis). Whilst very occasionally it can clarify where in the text we are, try to avoid simply retelling events as it takes up time and effort and will not earn you marks, and use the time to extend analysis and evaluation as explained above.

The spelling and grammar is overall fine, with only a few mistakes (Ã¢â‚¬Å“down fallÃ¢â‚¬Â and the phrase Ã¢â‚¬Å“This shattered his illusion of Tess Ã¢â‚¬Ëœyou were one personÃ¢â‚¬â„¢, Ã¢â‚¬Ëœnow you are anotherÃ¢â‚¬â„¢ led to Angels ultimate rejection of her.Ã¢â‚¬Â). The writer uses a variety of language to explain quotations, though without using particularly technical language. It is important to show you are aware of literary terms and techniques as this is a clear distinguishing factor between a low- and high-level answer Ã¢â‚¬â€œ it adds weight to an argument and gives the essay overall a tone of knowledge.