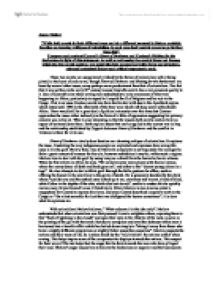 &quot;While both novels in their different ways and at a different moment in history certainly function as damning critiques of colonialism, in each case their central concerns go further than this&quot;

Aman Thakar "While both novels in their different ways and at a different moment in history certainly function as damning critiques of colonialism, in each case their central concerns go further than this" Compare and contrast Conrad's Heart of Darkness and Coetzee's Waiting for the Barbarians in light of this statement. As well as addressing the central ideas and themes which the two novels explore, you must take into account narrative form and structure, relevant contextual factors and critical responses to each. These two novels are unequivocally linked by the theme of colonialism with it being pivotal to the heart of each novel, though Heart of Darkness and Waiting for the Barbarians are beset by several other issues, some perhaps more predominant than that of colonialism. The fact that it was written in the early 20th century means Conrad's novella has a real prescient quality to it. One of Conrad's aims when writing was undoubtedly to raise awareness of what was happening in Africa, particularly in regard to Leopold the II of Belgium and his rule in the Congo. This is an issue Coetzee would also have had to deal with due to the Apartheid regime which lasted until 1994 in the aftermath of the Boer wars which left deep scars within South Africa. There would still be a great deal of political animosity over this issue but Coetzee approaches the issue rather indirectly in the form of a fable of oppression suggesting his primary concern was in his art. What is also interesting is that the lessons both novels contain have an aspect of universality to them. Both explore issues that can be applied to the current war in Iraq and the relationship established by Coppola between Heart of Darkness and the conflict in Vietnam is there for all to see. Heart of Darkness clearly does function as a damning critique of colonialism. ...read more.

He has a Buddha like quality which always gives him the appearance of having real substance, containing east and west. He is captivated by mystery demonstrated the book containing apparent cipher, he describes this as an "extravagant mystery". He becomes entranced finding this reminder of civilization within the wilderness. Initially drawn to that "blank space of delightful mystery", on the map looking at the river and proclaiming "The snake had charmed me". The darkness is the main mystery within the novella; this darkness is the unknown of "abomination" and malignancy within the hearts of wild men. It seduces Kurtz and establishes a link to Marlow's roots which, despite himself, he is forced to acknowledge the "faintest trace of response". The mystery takes on a physical form through the fog leaving them enveloped in "mysterious stillness", here it feels almost unnatural. With the incessant drum beat his curiosity over the natives way of life grows with his incessant questioning of things like the piece of white worsted around the mans neck in the grove of death and the meaning of the drum beat. This is coupled with his recollection of hunger in the face of admiration of the cannibal's self. Mystery is constantly alluded to throughout from things as simple as the account of Fresleven, Marlow needs to know the power of the darkness which can drive a man to such actions. The mystery is also something that is two way with the natives seeing the white man as an enigma. They see Fresleven as a deity thus afraid to venture near his body and are confused when branded criminals "the outraged law, like the bursting shells, had come to them, an insoluble mystery form the sea". Kurtz takes advantage of the naivete. Metaphors are used as a crux to what is going on within the book, the central one is the oil painting of the blind women carrying the torch. ...read more.

We see this portrayed in his pass times with his scrolls in some ancient language he cannot decode, in the way the Magistrate is similar to Marlow who shares this passion as seen in the book he finds in the hut with the markings in cipher. At the end of the novel we see the emergence of this " road that may lead nowhere". This encompasses what the Magistrate does with mystery, pursuing it despite it not having any real meaning. The way he says the children do not acknowledge him leaves a feeling of alienation, but despite the road leading nowhere, it is still one he must follow and in this his journey is unfinished. There is some resemblance with the end of Heart of Darkness. Marlow is compelled to follow a path that "seemed to lead into the heart of immense darkness". Marlow's journey feels unfinished with his path going the way of the waterway and to inescapable darkness. Both men are condemned to continue this inescapable journey. These two novels clearly have other central concerns than that of colonialism. For me though in Waiting for the Barbarians, it is the Magistrates personality which inclines him to resist the way he does. Because of his guilt, he has to fight against the imperialists and Coetzee sets up his character for that purpose. Saying this Coetzee, despite the climate doesn't tackle the issue head on as is seen in the constant ambiguity in the novel, it seems his central concern is more producing a great novel rather than producing a condemnatory work. In Heart of Darkness though, as much as being a critique of colonialism, it is also a real exploration into the base and tribal nature of man and his corruptibility. It is Conrad trying to portray what he himself discovered while in Africa as much as it is a critique of colonialism. Both characters clearly embody the spirit of resistance against this injustice, but despite such an imposing backdrop it does not overshadow any other concerns, allowing them to be illustrated with some even overtaking colonialism in prevalence. ...read more.