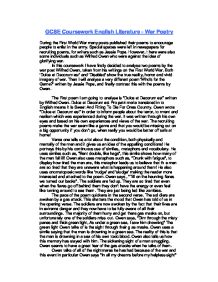 GCSE Coursework English Literature - War Poetry During the First World War many poets published their poems to encourage people to enlist in the army. Special spaces were left in newspapers for recruiting poems, for writers such as Jessie Pope. However, there were also some individuals such as Wilfred Owen who were against the idea of glorifying war. In this coursework I have firstly decided to analyse two poems by the war poet Wilfred Owen, taken from his writings on the First World War. Both 'Dulce et Decorum est' and 'Disabled' show the true reality, horror and vivid imagery of war. Then I will analyse a very different poem 'Who's for the Game?' written by Jessie Pope, and finally contrast this with the poems by Owen. The First poem I am going to analyse is "Dulce et Decorum est" written by Wilfred Owen. Dulce et Decorum est Pro patri moria translated in to English means It Is Sweet And Fitting To Die For Ones Country. Owen wrote "Dulce et Decorum est" in order to inform people about the terror, torment and realism which was experienced during the war. It was written through his own eyes and based on his own experiences and views of the war. The recruiting poems make the war seem like a game and that you would be missing out on a big opportunity if you don't go, when really you would be better off safe at home! ...read more.

"And girls glanced lovelier as the air grew dim". He says the girls look upon like he has some kind of disease. He talks of how he will never again feel the waist of a women, he also talks about how he threw away his knees in the war. It was his own fault for signing up and he didn't see the reality of war at that time. "There was an artist silly for his face" He was once a lovely face now he looks old. His back is now in a brace this is the back that was not so long ago was a strong as anything. He has lost his colour just like losing blood. He feels as tough he has poured his life away down endless shell holes, he wonders what he has been given for this. Nothing. "And leap of purple spurted from his thigh." He loves his youth. When his leg was blown away a massive part of him is now missing. One time he saw blood down his leg from a football injury, he thought this was great. Now he has no leg. He wonders why he joined the army. He tries to impress people as they told him he would do well in the army. One reason he signed up was because his dear Meg would be pleased. At the time he was not afraid. ...read more.

She thinks wars all fun and games. Pope wrote this poem in four verses with a regular rhythm and rhyme scheme. Throughout the poem she uses simple language so that everyone can understand it and therefore it will have a widespread effect reach the masses. She also writes in a more conversational manner which makes the poem more memorable and persuasive. She is constantly playing with peer pressure. The atmosphere of the poem is cosy which is totally opposite to war. The poem would have probably been read with a buoyant, jolly and upbeat tone of voice. Within the poem, Pope uses of everyday language give the poem a less formal feel and inviting people to go to war. I feel when men would read this poem they would be intimidated so much they would feel it is their duty as being men to help their country. In conclusion, I feel that all three of these poems are effective in studying the literature of the First World War as they both present such different pictures. Owen's poems are an excellent example of poetry exposing the realism of war where as Pope's poem is an excellent example of how she portrays the war as a game and encourages people to enlist. The contrast between the two allows the reader to see the reality of the First World War from two different perspectives. However, out of the three poems I still would think the Pope's was the most effective poem that the reader would have followed. ...read more.

This is an excellent GCSE essay which is well written and shows a clear understanding of the messages of all three poems. Accurate use of literary terminology, and discussion uses varied syntax effectively. In places PEE (Point, Evidence, Explain) is used very effectively but in other places more quotes are needed.