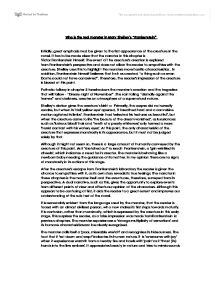 Who is the real monster in Mary Shelleys Frankenstein

Who is the real monster in Mary Shelley's "Frankenstein" Initially, great emphasis must be given to the first appearance of the creature in the novel. It has to be made clear that the narrator in this chapter is Victor Frankenstein himself. The event of the creature's creation is explored from Frankenstein's perspective and does not allow the reader to empathise with the creature. Shelley uses this to highlight the monsters more horrific characteristics. In addition, Frankenstein himself believes that he has created "a thing such as even Dante could not have conceived". Therefore, the reader's impression of the creature is biased at this point. Pathetic fallacy in chapter 5 foreshadows the monster's creation and the tragedies that will follow - "Dreary night of November" .The rain falling "dismally against the frames" and darkness, creates an atmosphere of a supernatural nature. Shelley's diction gives the creature's birht a Primarily, the corpse did not sweetly awake, but when its 'dull yellow eye' opened, 'it breathed hard and a convulsive motion agitated its limbs'. Frankenstein had 'selected his features as beautiful', but when the creature came to life 'the beauty of the dream vanished', as luxuriances such as 'lustrous black' hair and 'teeth of a pearly whiteness' only formed a more 'horrid contrast with his watery eyes'. At this point, the only characteristic of the creature that expresses monstrosity is its appearance, but it must not be judged solely by that. Although it might not seem so, there is a large amount of humanity conveyed by the creature at this point. As it 'stretched out' to reach Frankenstein, a 'grin wrinkled its cheeks', which indicates a need for its creator. ...read more.

Although the creature declared 'everlasting war against the species', the 'pleasant sunshine and the pure air of the day restored (it) in some degree of tranquillity'. After rethinking its actions the monster decided it 'has been too hasty in (its) conclusions' and became determined to forgive the De Lacey's behaviour towards it. It 'resolved to return to the cottage, seek the old man and win him to (its) party'. The creature kept dreaming about the incident in the cottage, which indicates how troubled and upset it was. When the monster 'directed (its) steps towards the cottage', 'all there was at peace'. However, 'the cottagers did not appear' and the creature feared some 'dreadful misfortune'. The fact that the monster still calls the De Lacey family its 'protectors' is very humane and expresses its desire for human company. The creature overheard the conversation of Felix with its landlord and when it realised that the family was quitting the cottage 'it thought of (its) friends and a gush of tears soothed (it)'. It felt 'hated and despised' and believed that its only hope would be to locate Frankenstein. It was 'determined to seek justice' from the person who had 'endowed (it) perceptions and passions' and then abandoned it. After the rage of the moment passed 'the sun recovered its warmth and the earth again began to look green'. The creature made sure he travelled only by night when it was 'secured from the view of man'. The reader is now surprised by the monster's feelings and behaviour. In spite of all that had happened, it recognised beauty in nature and the 'loveliness of the sunshine and the balminess of the air' cheered it up. ...read more.

Initially, their prejudice towards the monster led it to inappropriate behaviour towards various members of wider society, such as the young child and eventually Elizabeth. The actions of the De Lacey family also led the creature to different directions. The old blind man gave hope to the monster and managed to overcome the obstacle of its appearance and see a caring friend instead of a horrible wretch. Felix and Agathe though, have very ambiguous roles. Primarily they inspire love, as the monster 'long(s) to touch them, but are eventually the ones who cause the first acts of monstrosity of the creature, such as the burning down of their cottage. In my opinion, the true monster in Mary Shelley's Frankenstein is Victor Frankenstein. Firstly, pretending to be God, Frankenstein has caused the chaos presented in this novel. The novel's subtitle is The Modern Prometheus, which is very relevant to the story and very significant to the outcome. Frankenstein very ambitiously created a being using parts from dead bodies, just like Prometheus created life from clay figures. Both Frankenstein and Prometheus were punished for their actions, although in very different ways. Frankenstein lost almost every member of his family because of his selfishness and ignorance towards other beings. Prometheus was punished by being tied onto a rock and having his liver eaten by an eagle every day. Prometheus was physically punished, while Frankenstein was mentally punished for his actions. It is very well known that Mary Shelley believed in Romanticism. Therefore, I believe that ultimately Shelley's monster is a metaphor for nature as evidence of God's work. Romantic literacy opposed to many theories and scientists believing that by using electricity the key to human life could be found. Romantic literacy concentrated mostly on emotions and the importance of imagination as opposed to fact or reason. ...read more.