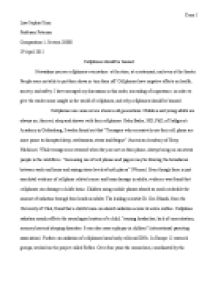 Why Cellphones should be banned

﻿Kunz Lisa-Sophia Kunz Professor Peterson Composition 1, Section 20380 29 April 2012 Cellphones should be banned Nowadays you see cellphones everywhere: at the store, at a restaurant, and even at the theater. People seem not able to put them down or turn them off. Cellphones have negative effects on health, society, and safety. I have arranged my discussion in this order, ascending of importance, in order to give the reader some insight in the world of cellphones, and why cellphones should be banned. Cellphones can cause severe stress in all generations. Children and young adults are always on; they eat, sleep and shower with their cellphones. Gaby Badre, MD, PhD, of Sahlgren's Academy in Gothenburg, Sweden found out that ?Teenagers who excessively use their cell phone are more prone to disrupted sleep, restlessness, stress and fatigue? (American Academy of Sleep Medicine). While teenagers are stressed when they are not on their phone, always being on can stress people in the workforce. ...read more.

They avoid uncomfortable situations and confrontations by either not answering a call or sending a text message. ?Text messaging is dangerous, not only does it ruin social interaction between humans, writing skills and expression. Everything becomes so impersonal and simple? (Marquez). There is no awkward silence or nonverbal response connected to text messaging. You can basically say anything you want in text messages without revealing your feelings or opinions. Text messaging is impersonal and young adults seems to lose the ability to have a face to face conversation. Moreover do cellphone have a great impact on Socioeconomic Diversity. Cellphones and cellphone contracts are expensive. Not every parent or student can afford a cellphone with unlimited text, call, and data. This may set young adults apart from their peer and make them subject of bullying. ?People can be inconsiderate when using the phone in public? (ehow) ? phone etiquette is poor or does not exist at all. ...read more.

News like that are disturbing, but far from uncommon. Young adults and teenagers reported that sexting is regarded as normal, and prerequisite for dating and hooking up. But sexted images and messages are not safe. With todays cellphone technology it is easy to send those pictures viral, online, without the initial sender knowing. The sender can be publicly exposed without their knowing. Furthermore can others take your picture without your consent. When convicted for distributing or owning child pornography, a teenager or young adult can face the chance to be labeled as sex offenders, ?a stigma that could haunt them throughout their lives, all for what one might consider a youthful, sophomoric indiscretion? (Calvert). Cellphones appear to be very convenient, yet they come with severe side effects. After considering the health, society, and safety issues that cellphones bring with them a ban of cellphones is justified. Unfortunately a ban is not in sight for right now so we need to make sure that children, teenagers and young adults learn how to use their cellphones right, without depending on them too much. ...read more.