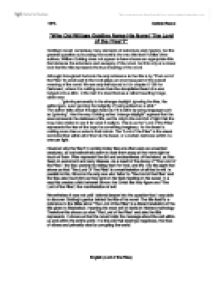 &quot;Why Did William Golding Name His Novel 'The Lord of the Flies'?&quot;

"Why Did William Golding Name His Novel 'The Lord of the Flies'?" Golding's novel comprises many elements of adventure and mystery, but the greatest question surrounding the novel is the very title itself. Unlike other authors, William Golding does not appear to have chosen an appropriate title that deduces the adventure and savagery of the novel, but it is only at a closer look that the title represents the true meaning of the novel. Although throughout the book the only reference to the title is by "The Lord of the Flies" its small part in the book plays an enormous part of the overall meaning of the novel. ...read more.

This is as the "Lord of the Flies" represents the fear of the boys for something imaginary, for the beast is nothing more than a voice in their minds. The "Lord of the Flies" is the visual reminded that within all of them is the beast, or a certain darkness which no-one can fight. However why the flies? In society today flies are often seen as unwanted creatures, as we instinctively seem to swat them away at the mere sight or touch of them. Flies represent the dirt and uncleanliness of the island, as flies feast on excrement and carry disease. As a result of the decay of "The Lord of the Flies", the flies worship its rotting flesh for food, and life. ...read more.

In a way this creates a link between Simon; the Christ like holy figure and "The Lord of the Flies"; the manifestation of evil. Nevertheless it was not until I delved deeper into the question that I was able to discover Golding's genius behind the title of his novel. The title itself is a reference to the Bible since "The Lord of the Flies" is a literal translation of the title given to Beelzebub, meaning the most evil of devils in Hebrew mythology. Therefore this shows us what "The Lord of the Flies" and also the title represents. It shows us that the novel holds the message about the evil within us and within the entire world. It is this evil that destroys happiness, the lives of others and primarily what is corrupting the world. 10PA Debbie Reeve English (Lord of the Flies) ...read more.

This is a very successful essay that satisfies the question brilliant. The candidate shows adept knowledge of the novel and it's allegorical significance, whilst paying the most astute focus of their essay to the analysis of the title. From the ...

This is a very successful essay that satisfies the question brilliant. The candidate shows adept knowledge of the novel and it's allegorical significance, whilst paying the most astute focus of their essay to the analysis of the title. From the introduction alone it is clear the candidate has taken care to ensure what they write is precise and clear, rather than simply making vague declaratives about the novel until they feel their introduction is of sufficient size - this is something examiners find indicative of a poor essay to follow so to see an introduction so actively consulting the question and acting as an incentive for later analysis.

There is a very good understanding of Golding's symbols as well as the socio-religious references he makes (with regard to the translation of Beelzebub meaning "lord of the demon flies", or as in the title, 'Lord of the Flies'.

The Level of Analysis here is very good, and indicative of a candidate who confidently operates at an A grade for A Level. The candidate's analysis is well-sourced and precise as it hones directly to the scene where Simon confront the lord of the flies, a sow's head mounted on a spear.They interpret the symbol of the sow's head brilliantly and insightfully, making good use of Golding's intentions as they analyse Allowing their analysis to be backed up by contextual factors such as the intentions of the novel help aid the essay's strength and effectiveness.

Where I think a possible trick was missed was really going to town about the religious messages Golding was aiming for, and drawing comparison between the confrontation of Simon and the lord of the flies and the confrontation of Jesus and the Devil in the desert. But this is not such a huge issue in light of the evidence that is provided so well in the rest of the essay. There is delicate language and symbolic analysis evident and this integrated approach helps the essay because a thoroughly interesting read that I have every confidence that even after marking dozens of the same essays, examiners will still enjoy reading and marking.

The Quality of Written Communication (QWC) here is very good. The candidate demonstrates use of very good English skills and analytical skills. There are no major errors - if any - with regard to errors in use of grammar, punctuation and/or spelling. The confidence with which they write will reflect well when the examiner marks their essays, helping to improve their QWC mark and bring it above essays where the discourse is awkward and disjointed.