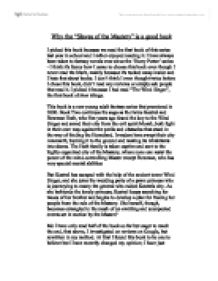 Why the "Slaves of the Mastery" is a good book I picked this book because we read the first book of this series last year in school and I rather enjoyed reading it. I have always been taken to fantasy novels ever since the 'Harry Potter' series - I think it's funny how I came to choose this book even though I never read the blurb, mainly because it's tucked away inside and I hate that about books. I don't think I even thought twice before I chose this book, didn't read any reviews or simply ask people that read it. ...read more.

Invaders have swept their city Aramanth, burning it to the ground and making its inhabitants into slaves. The Hath family is taken captive and sent to the highly organized city of the Mastery, where none can resist the power of the mind-controlling Master except Bowman, who has very special mental abilities But Kestrel has escaped with the help of the ancient tower Wind Singer, and she joins the wedding party of a pawn princess who is journeying to marry the general who raided Kestrels city. As she befriends the lonely princess, Kestrel keeps searching for traces of her brother and begins to develop a plan for freeing her people from the rule of the Mastery. ...read more.

has started to talk to cows, cats and even balance a stick with his mind while kestrel is on a moving city Sirene (the moving city is known as an island on wheels) is where kestrel currently is with her friend Jodhia. So far I have very much enjoyed this book and hope to finish it soon, I will be reading it in bed, travelling, school and so on. By the rate I am going I should be finished in a week, the book consists of 339 pages and I have read 156, and it took me 4 days to get that far so I will finish soon if I continue at my current speed. ...read more.