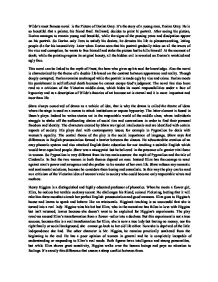 Wilde's most famous novel is the Picture of Dorian Gray. It's the story of a young man, Dorian Gray. He is so beautiful that a painter, his friend Basil Hallward, decides to paint hi portrait. After seeing his picture, Dorian manages to remain young and beautiful, while the signs of the passing years and dissipation appear on his portrait. So Dorian only lives to satisfy his desires, he devotes his life to pleasure-seeking, letting people die for his insensitivity. Later when Dorian sees that his portrait gradually takes on all the traces of his vice and corruption, he wants to free himself and stabs the picture but he kills himself. At the moment of death, while the painting regains its original beauty, all the hidden evil is revealed on Dorian's wrinkled and ugly face. This novel can be linked to the myth of Faust, the hero who gives up his soul for knowledge. Also the novel is characterized by the theme of a double life based on the contrast between appearance and reality. ...read more.

The central theme of the play is the social importance of language, Shaw says that differences in English pronunciation formed a barrier between the classes. He advocated the creation of an easy phonetic system and also attacked English State education for not teaching a suitable English which would have equalized people. Shaw was a misogynist but he believed in the presence of a greater vital force in women. So Pygmalion is very different from its two main sources: the myth of Pygmalion and the tale of Cinderella. In fact the two women in both themes depend on men. Instead Eliza has the courage to react against man's power and arrogance and she prefers to be master of her own life. Shaw refuses any romantic and sentimental solutions, because he considers them boring and unrealistic. In this way the play can be read as a criticism of the Victorian idea of women's role in society who could become only respectable wives and mothers. Henry Higgins is a distinguished and highly educated professor of phonetics. ...read more.

Both figures have intelligence and strong personalities, but while Eliza shows great sensitivity, Higgins walks over the human beings and pays no attention to feelings. It's exactly this difference that causes a sharp conflict between them. The Aesthetic movement reflects the sense of frustration of the artists and their reaction against the materialism of society. The theorist of Aestheticism is Walter Pater, he considers art as the most important thing in his life. "Art for Art's sake" means that a work of art must only be judged in terms of aesthetical criteria, so it can be beautiful or ugly, it can't be good or bad according to moral standards or social conventions. Only art could stop time and so people must spend their life as a "work of art" living any moment with happiness and pleasure. These ideas influenced a lot of writers, especially Oscar Wilde, the most important writer of this period in England. As a matter of fact, in the Preface to the Picture of Dorian Gray, Wilde wrote that "there is no such thing as a moral or immoral book. Books are well written or badly written, that is all". ...read more.