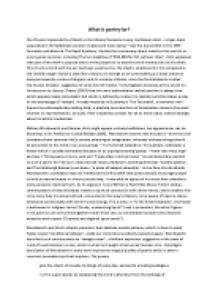 William Wordsworth and Damien Hirst might appear unlikely bedfellows, but appearances can be deceiving.

ï»¿What is poetry for? The Physical Impossibility of Death in the Mind of Someone Living, by Damien Hirst – a tiger shark suspended in formaldehyde solution in glass and steel casing – was the star exhibit in the 1997 Sensation exhibition at The Royal Academy. Amidst the controversy about whether this was Art or avant-garde cynicism, including The Sun headline of “£50,000 for fish without chips”, Hirst explained that part of the work’s purpose was to invite people to re-examine their mental picture of a shark. This struck a chord with me as I had been surprised by: the shark’s smallness (4.3 m) compared to the clichéd image I had of a Jaws-like creature; its strange air of vulnerability as a dead presence being surveyed by curious strangers; and its uncanny stillness, since the formaldehyde created the illusion of water, suggestive of some kind of motion. Terry Eagleton observes at the end of An Introduction to Literary Theory (1983) that the most authoritative radical position is always that which appears newly iconoclastic but which is defined by a return to radical roots (he makes a play on the etymology of ‘radical’). A ready-made (as in Duchamp’s ‘The Fountain’), a memento mori (hence the philosophically riddling title), a playfully accurate form of Aristotelian mimesis (the work involves no representation, as such), Hirst’s mysterious shark, for all its shock value, winks teasingly about its artistic credentials. ...read more.

T.S. Eliot, a century later, was more sceptical about the transformative possibilities of poetry: And what is the experience that the poet is so bursting to communicate? By the time it has settled down into a poem it may be so different from the original experience as to be hardly recognisable. The ?experience? in question may be the result of a fusion so numerous, and ultimately so obscure in their origins, that even if there be communication of them, the poet may hardly be aware of what he is communicating; and what is there to be communicated was not in existence before the poem was completed. (The Use of Poetry and the Use of Criticism, 1933) The assurance of Wordsworth?s ?a certain colouring of the imagination? trips up, embarrassed by the incapacity of words to capture feelings and the inability of the feeling, in the first place, to make itself clearly felt. Poetry, Eliot suggests, is doomed to failure: And so each venture Is a new beginning, a raid on the inarticulate With shabby equipment always deteriorating In the general mess of imprecision of feeling, Undisciplined squads of emotion. Wordsworth?s nostalgic revisiting of childhood visionary insight (the ?trailing clouds of glory? of the ?Immortality Ode?) ...read more.

Yet the poem does succeed in conveying the genuineness of Browning?s love and the poignancy of his knowledge that any experience of that feeling will be fleeting. As he has walked ?hand in hand? through idyllic countryside earlier that day, so now, in this poem, he similarly walks with his lover, guiding her precisely and tenderly through his thoughts. The experience of being ?Two in the Campagna? turns into two rhymes (lines one, three and five; lines two and four). This idea is hinted at through the metaphor of catching, which refers to poetic composition in verse two and erotic intimacy in verse ten. The ?infinite passion? and mere ?minute? of actual loving intensity transforms into the poem itself, despite the poet?s claim about the irrecoverability of that experience. As such, Browning?s poem (and Hirst?s shark and Wordsworth?s celandine) illustrates one of the great paradoxes of art, that imagined reality can, strangely, seem more real to us than felt experience itself. Eliot remarked that ?poetry is a mug?s game?, and, more recently, Amy Winehouse has told us that ?love is a losing game?. ?Two in the Campagna?, nevertheless, proves the truth of another of Eliot?s dictums: ?For us, there is only the trying? (East Coker, ?Four Quartets?, V.18). 1,623 Steve Reeves ...read more.