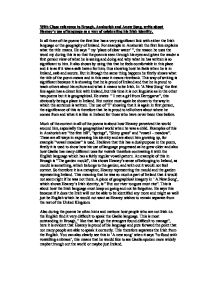 With Close reference to Broagh, Anahorish and Anew Song, write about Heaney's use of language as a way of celebrating his Irish identity.

With Close reference to Broagh, Anahorish and Anew Song, write about Heaney's use of language as a way of celebrating his Irish identity. In all three of the poems the first line has a very significant link with either the Irish language or the geography of Ireland. For example in Anahorish the first line explains what the title means. He says " my 'place of clear water' ", the reason he uses the word my during this is so that the poem is seen through his eyes and gives the reader a first person view of what he is seeing and doing and why what he has written is so significant to him. It also shows by using this that he feels comfortable in this place and it is as if it was a safe haven for him, thus showing how he feels when he is in Ireland, safe and secure. ...read more.

The use of "I" showing that it is again in first person, the significance of this is therefore that he is proud to tell others about where he comes from and what it is like in Ireland for those who have never been thee before. Much of the content in all of the poems is about how Heaney perceived the world around him, especially the geographical world when he was a child. Examples of this in Anahorish are "the first hill", "springs", "Shiny grass" and "vowel - meadow". These are all ways in expressing his identity and are about him growing up, for example "vowel meadow" is used. I believe that this has a dual purpose in the poem, firstly it is used to show how his use of language progressed as he grew older and also how Gaelic has many different uses for vowels therefore contrasting it with the English language which has a fairly regular vowel pattern. ...read more.

He says this because if it does the Irish will not be able to be identified any more and might as well just be English which he would not want as Heaney wishes to remain separate from the rest of the United Kingdom. Also during the poems he often hints and metions how people who are not Irish i.e. the English find it very difficult to speak the Gaelic language. This is most outstanding in Broagh, " like that last gh the strangers found difficult to manage", here it is evident that Heaney is proud of his language and puts forward the point that not many people are able to speak it correctly. This therefore separates the Irish from the English. You can also clearly see this in 'A new song' when it says "to flood with vowelling embrace', this means that he would like to see Gaelic spoken more widely maybe through out the world or maybe just Ireland. ...read more.