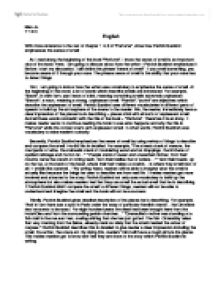 With close reference to the text of chapter 1 to 3 of &quot;Perfume&quot;, show how Patrick Suskind emphasizes the sense of smell.

Man Ju Y 12 D English With close reference to the text of chapter 1 to 3 of "Perfume", show how Patrick Suskind emphasizes the sense of smell. As I read along the beginning of the book "Perfume", I know the sense of smell is an important clue of the book. Here, I am going to discuss about how the writer - Patrick Suskind emphasizes it. Before I start my discussion, I will define the phrase "sense of smell". If you smell something, you become aware of it through your nose. The phrase sense of smell is the ability that your nose has to detect things. First, I am going to look at how the writer uses vocabulary to emphasize the sense of smell. At the beginning of the novel, a lot of words which describe smells are introduced. For example, "Stank", in verb form, past tense of stink, meaning something smells extremely unpleasant. ...read more.

" And their heads, up on the top, at the back of the head, where their hair makes a cowlick... is where they smell best of all. It smells like caramel..." By writing these, readers will be able to imagine what the smell is actually like because the things he uses to describe are from real life. It makes readers get more involved and attracted to the story. Patrick Suskind not only uses vocabulary to build up the atmosphere but also makes readers feel that they can smell the actual smell that he is describing. If Patrick Suskind didn't compare the smell to different things, readers will not be able to understand and imagine the smell and the book will not be a success. Thirdly, Patrick Suskind gives detailed description of the places he is describing. For example, "And in turn there was a spot in Paris under the sway of particular fiendish stench...the Cimetiere des Innocents to be exact. ...read more.

Later on, Grenouille was given away to Father Terrier, then to Madam Gaillard because he doesn't smell like a normal baby would smell. This seems to relate to the title of the book "Perfume". Patrick Suskind writes the part of why the baby was passing to other people in detailed, because he want to emphasize the sense of smell. When Father Terrier first got Grenouille, he thinks that the baby is pleasant, but when Grenouille wakes up, "it seemed to Terrier As if the child saw him with his nostrils, as if it were staring intently at him...as if it were using its nose to devour something whole, something that came from him, from Terrier..." The baby's sense of smell is very strong, and Patrick Suskind describes this in detailed In conclusion, the sense of smell which Patrick Suskind emphasizes is an important clue of this novel. Suskind's revolting visual imagery captures the olfactory sense of the reader thus dragging him into the fictitious world of hideous stench. Once inside this malodorous hell, Suskind panders to the readers' baser instincts through the novel's protagonist, Jean Baptiste Grenouille. ...read more.