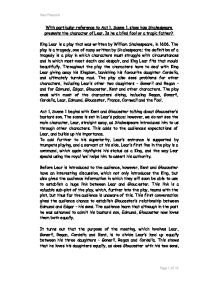 With particular reference to Act 1, Scene 1, show how Shakespeare presents the character of Lear. Is he a blind fool or a tragic father?

With particular reference to Act 1, Scene 1, show how Shakespeare presents the character of Lear. Is he a blind fool or a tragic father? King Lear is a play that was written by William Shakespeare, in 1606. The play is a tragedy, one of many written by Shakespeare; the definition of a tragedy is a play in which characters must struggle with circumstances and in which most meet death and despair, and King Lear fits that mould beautifully. Throughout the play the characters have to deal with King Lear giving away his Kingdom, banishing his favourite daughter Cordelia, and ultimately turning mad. The play also sees problems for other characters, including Lear's other two daughters - Goneril and Regan - and for Edmund, Edgar, Gloucester, Kent and other characters. The play ends with most of the characters dieing, including Regan, Goneril, Cordelia, Lear, Edmund, Gloucester, France, Cornwall and the Fool. Act 1, Scene 1 begins with Kent and Gloucester talking about Gloucester's bastard son. The scene is set in Lear's palace; however, we do not see the main character, Lear, straight away, as Shakespeare introduces him to us through other characters. This adds to the audiences expectations of Lear, and builds up his importance. To add further to his superiority, Lear's entrance is supported by trumpets playing, and a servant at his side. Lear's first line in the play is a command, which again highlights his status as a King, and the way Lear speaks using the royal 'we' helps him to assert his authority. Before Lear is introduced to the audience, however, Kent and Gloucester have an interesting discussion, which not only introduces the King, but also gives the audience information in which they will soon be able to use to establish a huge link between Lear and Gloucester. This link is a valuable sub-plot of the play, which, further into the play, teams with the plot, but thus far the audience is unaware of this. ...read more.

When Lear invites himself to stay at Goneril and Regan's houses, he imposes a lot of conditions, and despite giving the two of them his entire Kingdom, it is important to note that he does not want to lose his authority as a King. This gesture suggests that Lear is acting as a blind fool, as he wants all the benefits of being a King, without having to do anything for it, and he can't see that this is a vital mistake; if he is too old to run the Kingdom, he cannot be fit to remain King. After Lear's speech, Kent tries to change his mind. He speaks politely to Lear, addressing him as "Royal Lear", and tells Lear how much he means to him. Shakespeare has chosen for Kent to say this as Lear loves to be praised, and Kent really does love Lear. Lear replies, "the bow is bent and drawn; make from the shaft". Shakespeare uses the metaphor of a bow and arrow to tell Kent that Lear's mind is already made up. This is a powerful and violent metaphor, which, again, shows that Lear thinks of himself to be feared. Also, this line indicates that Lear may have realised that he has made a mistake, but as King he is to proud to change his mind, so he sticks with his decision. The line shows this because Lear is not telling Kent that he is right with his decision, or that he still agrees with it, just that he has already come to a decision, and as King he cannot change it, for he would be seen as weak, an unfit to rule a Kingdom. Shakespeare then uses Kent to insult and disrespect Lear, as the audience know how much Lear values people's opinions of him, and Kent thinks that this may make Lear see how foolish he has been. ...read more.

At this point Lear is being overcome with agony remembering the grave injustice that he has served his favourite daughter, Cordelia, and his other foolish mistakes. Act Two and Three sees Lear in the middle of a storm. The storm is an effect used by Shakespeare to show several things. Firstly, Shakespeare is symbolising the weather to represent Lear's mood; at the moment the weather is conveying that Lear is angry has now gone mad, as the storm is wild, ferocious and bad-tempered. Also, as Elizabethan's (including Shakespeare), believed that it was up to God to chose the King, and not individuals, such as Lear, the storm is Shakespeare's way of showing that everything isn't right in the world, and God is showing his displeasure in Lear. In Act Four, Scene Seven, when Lear has been united with his daughter, he says "I am old and foolish". This clearly shows that he is aware of his mistakes and sees what he has done is foolish. When Lear renters, holding Cordelia dead in his arms, he says "Mine eyes are not o' the best", which shows that even Lear himself can see that he has become a blind fool, and has not been making accurate, sensible decisions. It is ironic that when Lear dies, (Act Five, Scene Three), the last words he speaks are "Look there, look there", which ties in with the main theme of blindness that is carried on throughout the play. Overall, I think that Shakespeare has presented the character of Lear as a blind fool. This is because, although on occasions he may act as, and make decisions as, a tragic father, Lear is only doing so because he is blind to what is right and makes these mistakes through sheer foolishness. Also, not all of his mistakes are related to him being a father; some are as a King, and some are just as a person. ?? ?? ?? ?? Sam Peacock Page 1 of 12 ...read more.