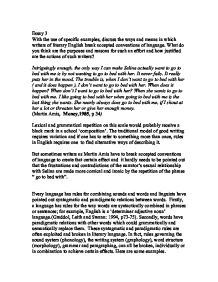 With the use of specific examples, discuss the ways and means in which writers of literary English break accepted conventions of language. What do you think are the purposes and reasons for such an effort and how justified are the actions of such writers?

Essay 3 With the use of specific examples, discuss the ways and means in which writers of literary English break accepted conventions of language. What do you think are the purposes and reasons for such an effort and how justified are the actions of such writers? Intriguingly enough, the only way I can make Selina actually want to go to bed with me is by not wanting to go to bed with her. It never fails. It really puts her in the mood. The trouble is, when I don't want to go to bed with her ( and it does happen ), I don't want to go to bed with her. When does it happen? When don't I want to go to bed with her? When she wants to go to bed with me. I like going to bed with her when going to bed with me is the last thing she wants. She nearly always does go to bed with me, if I shout at her a lot or threaten her or give her enough money. (Martin Amis, Money,1985, p 34) Lexical and grammatical repetition on this scale would probably receive a black mark in a school 'composition'. The traditional model of good writing requires variation and if one has to refer to something more than once, rules in English requires one to find alternative ways of describing it. But sometimes writers as Martin Amis have to break accepted conventions of language to create that certain effect and it hardly needs to be pointed out that the frustrations and contradictions of the narrator's sexual relationship with Selina are made more comical and ironic by the repetition of the phrase " go to bed with". Every language has rules for combining sounds and words and linguists have pointed out syntagmatic and paradigmatic relations between words. Firstly, a language has rules for the way words are syntactically combined in phrases or sentences; for example, English is a 'determiner adjective noun' language.(Graddol, Leith and Swann: 1994, p73-75). ...read more.

( Wordsworth 1991, p 26) The passage consists of a single rather long, sentence whose main subject and verb, I and stopped, occur very late in its structure. This late placing of the verb, the two obligatory clause elements in English, contravenes a general 'rule' of English sentences, in which commonly the main verb appears in the sentence, with any lengthy and complicated phrases occurring after the verb. The result of this general tendency in English sentences is that speakers of English expect the verb sooner rather than later. When it fails to occur, there is either a feeling of frustration and expectation, or in this case, a breathless, headlong rush towards the verb. (Maybin and Mercer,1996, p 172 -173) Some writers go against tradition by using their own variety or some other nonstandard variety of English for characters' voices, or even for whole poems and novels. The use of strongly vernacular language would seem to go against the idea that literary language represents the best or most prestigious forms of English, and is distinctly different from everyday usage. Vernacular English is not particularly widespread in traditional English literature, although there are some famous examples of dialect in character's speech. ( eg. Dicken's Hard Times ). (Maybin and Mercer,1996, p177) "Huckleberry Finn" is one of the most influential models of nonstandard usage in English literature. It has a first-person narrator, the young American boy, who draws us into the world of a homeless, rootless child on the edges of respectable society in the USA of the late nineteenth century. Here he describes part of his wanderings, aboard a raft on the Mississippi. It must be 'a' been close on to one o'clock when we got below the island at last, and the raft did seem to go mighty slow. If a boat was to come along we was going to take to the canoe and break for the Illinois shore. ...read more.

There is the clever use of parallel syntactical structures and similar sounds- just the kind of repetition one expect to find only in a poetry. Explosion of alliteration in the first paragraph, 'l's and 't's : shows his lust in his celebration of his beloved's name. (light, life, loins, tip, tongue, trip, Lo. Lee. Ta) In the first paragraph there is a lyrical outburst in the series of exclamations without finite verbs. Its opening metaphors is extravagant and faintly archaic in diction: light of my life, fire of my loins, my sin, my soul. The second paragraph sees a series of identically structured clauses listing the various names of the beloved like a profane litany: She was Lo.... She was Lola.... She was Dolly... She was Dolares... But in my arms she was always Lolita. You could even set it to music. (Lodge, David , 1992 p 94) As seen by the example given above, certain rules of English are broken to achieve special artistic effects. Linguistic analysis known as stylistics try to pinpoint a number of language features commonly found in artistic uses of English. One key idea used by stylisticians is the notion that literary language is different from everyday language because it draws attention to some property of the language itself, and highlights or foregrounds it. Foregrounding can be achieved by focusing on sounds, grammar, or meanings. One example of foregrounding is the way in which literary language especially poetry, uses regular controlled patterns of rhythm, rhyme and repetition. Foregrounding also occurs when particular language rules are played with, or broken. Duffy uses metaphorically the verb 'crackled' which normally follows an inanimate subject ( eg, sticks crackling in a fire ). This together with her metaphoric comparison of the marriages with cellophane around polyester shirts, evokes images of relationships which are dry, brittle and syntactic - just like the materials which were at that time first being produced and which were replacing natural materials in every area of life. ...read more.