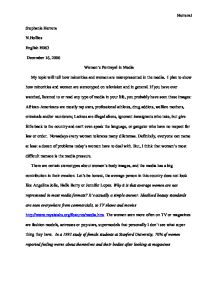 Stephanie Herrera N.Hollies English H063 December 16, 2006 Women's Portrayal in Media My topic will tell how minorities and women are misrepresented in the media. I plan to show how minorities and women are stereotyped on television and in general. If you have ever watched, listened to or read any type of media in your life, you probably have seen these images: African-Americans are mostly rap stars, professional athletes, drug addicts, welfare mothers, criminals and/or murderers; Latinos are illegal aliens, ignorant immigrants who take, but give little back to the country and can't even speak the language, or gangster who have no respect for law or order. Nowadays every woman tolerates many dilemmas. Definitely, everyone can name at least a dozen of problems today's women have to deal with. But, I think that women's most difficult menace is the media pressure. ...read more.

The music industry just like the film industry has a big effect on how women are seen in today's society. Music videos show sexual behavior to attract the audience. Women bodies are most of the times displayed in a sexual way, and this behavior is imitated by young girls all over the world. It is clear that the image of young women in the media has a big impact not only in young people but everybody. No matter if is through music, movies, TV shows, or anywhere in the media, young people are influenced to act like the people that they see on TV. Music videos show women as a sexual object, on videos like "MTV videos" you will see the guys fully dressed, but the women in the background are showing up their breasts and other parts. ...read more.

The truth that women are portrayed negatively in advertisements change the way that society views them. This portrayal of women as sex objects influences the way many guys learn to see women: as a pretty package, something to take a look at, but not necessarily to respect. Sorry to say, this becomes a common view from society, resulting from the media. Women, in return, are given less respect and not treated as equals. The media portrays women in a negative way. The media presents the idea that women are inferior to and subordinate to men. This portrayal is seen in music lyrics and music videos. It is also seen in a number of advertisements, where women are basically there just to look pretty. This type of portrayal of women in the media can have many negative effects http://www.msu.edu/~noworyta/webfolder/index2.html. Herrera1 ...read more.