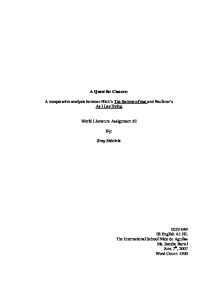 World Literature: A Comperative Analysis Between The Sorrow of War and As I Lay Dying

A Quest for Closure:

As I Lay Dying

Bao Ninh’s novel, The Sorrow of War, and William Faulkner’s As I Lay Dying, are two novels, which contain a lot of similarities and differences between them. Most of the similarities that exist between the novels are between the protagonists from both novels. The protagonists whoa share a few similarities are Kien from The Sorrow of War, and all of the living members of living members of the Bundren family in As I Lay Dying. During the entire novel of The Sorrow of War Kien is on a quest to find closure for all the death he has encountered during the war. Four of Kien’s attempts are very similar to the attempts the five remaining Bundren family for closure in As I Lat Dying. One of Kien’s attempts to get rid of his sorrows and get some closure is when he attempts to burn the novels he has written about the war. Darl Bundren attempts something very similar when he tries to burn his mother’s coffin. Though both characters are attempting to rid themselves from their sorrows, Kien’s sorrows are his memories from the past, from war, while for Darl the cause of his sorrows is his mother’s corpse, which is right there with him at all times and also causes many more sorrows for the rest family. Another effort for closure by Kien is when he goes back to the forest to look for the dead bodies. Kien hopes that by putting to rest those he has lost will finally allow his scared soul get some rest as well. In a way this attempt is very similar to what cash’s attempt with Adie’s coffin. Cash seems to have the same hope as Kien, which is that by doing this deed for his mother he will get some closure. Another of Kien’s attempts for closure is also very similar to Dewy-Dell’s and Jewel’s attempt for closure. Both Dewy-Dell and Jewel attempt to forget their sorrows by getting rid of that object which reminds them of it, Kien attempts the same thing only for Kien no object is needed to remind him of his past suffering. The last similarity is Anse’sreplacement of his diseased wife, and Kien’s replacement of his memories with fictive

stories. Both characters are trying to replace their sorrows although Anse is replacing it with something concrete and Kien with something spiritual.

Both Kien and Darl Bundren attempt to get some closure by burning that which reminds them of their sorrows. The difference between the actions taken by these two characters is that Darl attempts get rid of his mother’s corpse, which is there with him at all time, constantly adding more issues and sorrows to his life. Meanwhile, although Kien’s action is looking for the same result, it is much more spiritual. Both characters are hoping for some closure by getting rid of their sorrows. Kien hopes that by burning the stories he has written about the war will finally allow his wounded soul to heal. The difference between these tow actions is that the thing Darl is trying to get rid of is in fact the source of his sorrows, while Kien is attempting to get rid of that which reminds him of his sorrows. For that reason even though both of actions taken by these men are very similar and are looking for the same results some slight differences still exist.

Cash Bundren and Kien also have a very similar attempt for closure. Both characters try to put to rest the loved ones they have lost believing that this will allow them to put their wounded, sorrowful soul to rest. Cash builds the coffin for his mother hoping that if she is well off he will be able to get some closure. Kien goes back to the forest to search for MIA bodies. This action by Kien is very much like Cash’s action as he hopes that if he finds the bodies of those he has lost, it will help him get rid of the ghosts of his past which have been hunting his soul and he will finally have his closure. Although both actions are very similar it is the scale of the action, which is different. Although Cash’s deed is very noble, his deed for his mother simply cannot be seen in the same light as Kien’s deed. Yes Cash’s deed is very beautiful, but at the same time it is a deed that

required much less effort than Kien’s, which is where the difference lies. The task that Kien faces in order to achieve his deed is much more complex than Cash’s task. Kien has to find the bodies of those he has lost before he can put them to rest. Despite these slight differences both actions originate from the same origin, the heart, and both men are attempting to accomplish the same thing, closure.

Dewey-Dell and Jewel both do the same thing to get closure. Both characters attempt to get rid of the thing that keeps reminding them of their dead mother. Kien attempts something very similar in to have closure, he begins drinking his problems away hoping to forget about his sorrows from the war. For Dewey-Dell her pregnancy is what reminds her of her mother, since she wants to forget about her mother and have closure, she decides to have an abortion so this thing that keeps reminding her of Addie Bundren will be no more and she will finally have her closure. Jewel attempt to have closure is exactly the same, although instead of a pregnancy reminding him of Addie, it his beloved horse, which he gives up without a fight, secretly hoping that it will give him closure to his mother’s death. When Kien starts to drink it is for the same reasons as Dewey-Dell’s and Jewel’s actions, Kien hopes that this way he will be able to forget about what happened in the war. Kien hopes that by drinking his mind would not be in constant sorrow remembering all the horrific things he has experienced during the war. The difference between Dewey-Dell, Jewel and Kien’s actions are that the first two had to get rid of something that causes them to remember, and for Kien the memories are there without anything needing to remind him of it. Kien’s experience in the war has so deeply scared his soul that he does not need anything to remind of it, unlike the two Bundren siblings. Aside from those small

differences the basic idea of getting rid of the painful memories for closure exists in the actions of all three characters.

Another very common act in the quest for closure in both novels is the attempt to replace the sorrowful memories with something else, instead of simply forgetting them. Kien writes his novels hoping that somehow his sorrowful memories of war will be replaced by fictive stories that never actually occurred. Kien hopes that by writing stories about his war experience it might cause his mind to view it as a story instead of something that actually occurred to him. In the end of As I Lay Dying Anse Bundren gets a set of false teeth and a new wife hoping that both things will be able to replace his diseased wife. Both these characters are looking to have closure to the death and lost they have experienced by replacing them with something else. The difference in the quests both these men take is that Anse actually gets two concrete things to replace his wife, while Kien is simply trying to replace his memories of war. Although they go about it differently, the idea of replacing those they have lost in order to finally have some closure exists in the actions of these two characters.

Even though all six characters in both novels goes about it differently they are all on a quest for closure. Since in The sorrow of war this is a main theme, Kien goes about his quest in many different ways. The five characters from As I Lay Dying all also have a quest to have closure. The quest of each of the Bundren family is in a way similar to one of Kien’s quest. If it is Darl’s burning his mother’s coffin and Kien burning the books he has written. It is also Cash building his mother’s coffin and Kien going back to the forest to look for the friends he lost in the war. It is also Dewey-Dell’s and Jewel getting rid of what it is that reminds them of Adie (the cause of their sorrows) or Kien getting rid of his

memories. Or if it is the replacement of the sorrows as done by Anse and Kien. As can be seen for every action towards closure taken by a character in As I Lay Dying, Kien the protagonist of The Sorrow of war has an action, which is in a way very similar to the actions taken by the Burden Family.