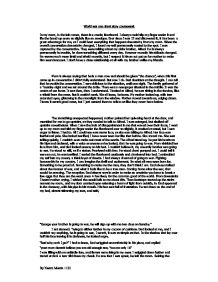 World war one short story coursework In my room, in the left corner, there is a creaky floorboard. I always could slip my finger under it and life the board up every so slightly like an envelope. Ever since I was 15 and discovered it, it has been a great advantage for me, as I could hear everything that happens downstairs, from my room. When the overall conversation downstairs changed, I found my self permanently routed to the spot. I was captured by the conversation. They were talking about my older brother, Alfred. He is always permanently in trouble, he does something different every day. However recently his attitude changed. He seems much more timid and afraid recently, but I suspect it his an act put on for mother to make him seem innocent. I don't have a close relationship at all with my brother unlike my friends. Mum is always saying that he is a man now and should be given "the chance", when this first came up in conversation I didn't fully understand. But now I do. Dad shudders at the thought. I can tell that he avoids the conversation. I was oblivious to the situation, until one night. The family gathered of a Tuesday night and we sat around the table. There was a newspaper situated in the middle. It was the centre of our focus. It was then, then I understood. I looked at Alfred, he was sitting in the shadow, like a shield from the news. But it couldn't work. We all knew, he knew. My mother looked up, with tear saturated eyes, glistening in the moonlight from the window. Mother moved towards us, edging closer. I knew it wasn't good news, but I just wanted them to talk to us like they never have before. The something unexpected happened, mother pointed her quivering hand at the door, and mumbled for me to go upstairs, as they needed to talk to Alfred. ...read more.

Well if you really want to sign up, you now have the means. But I thought it was easy to, truth..My brave face was fake. I am terrified just like everyone else. You won't be, you are brave. Mum wants you to be safe George, listen to her. She pushed me to this, said it's my duty. Do what you wish eh' mate Yours Alfred "Oh my God, he has written me a note, Thomas, I can go to war, he's given me the chance. I love him, I can't believe I'm allowed!" Thomas reminded me, that I'm not, the note might not even work. We all went up into my room, and I got out my letter writing kit. I wrote on a piece of paper thank you, and gave the pen to Phillip who forged a note of his own. As we has all finished, I crumpled up the bit of paper I had just written on, and lifted up the floorboard slowly. Mother was talking to Dad, about Alfred. Dad wishing he ahs stayed here. I bent the wood back down, and we all left the room, I thundered down the stairs, and I left the piece of paper on the table. We slammed the front door shut, and walked down the road, as the recruits had, until we reached the post office. Posters were stuck up all around the windows. I flounced in, and shoved my note under the glass, covering my face, so no one could see my young boyish features. The lady stamped my card. I no had my recruit number. I turned to my friends, and my face went white, as I knew my brothers had hours before. Within hours, I was seated on a train, wedged between two burly men. The ride was uncomfortable, and jerky, and silent in my particular carriage, for most of the journey. ...read more.

That is what had done this to my brother and me. I could tell he was scared, battered and beaten he stood before me. When he saw me, his face, full of guilt, it was my obsession that got him worrying like this. He put down his gun, and we slumped into a pit of grime. He was shaking, and shivering with fear. Another brave face was apparent. Word passed along the trenches of an attack. This attack was "over the top." I couldn't cope, Alfred helped me, and he was there. We were terrified together. Alfred and I got 3 hours rest that night, and then the attack was launched. We climbed up the wall and walked out on to no mans land, I held my gun, hands shaking, sweaty, it was slipping. My helmet wobbling, it was too big for me. I turned to Alfred and he gave me an encouraging look, but he was uneasy on his feet. I ran, shots flying, somewhere, one was flying with my number on it. I heard a loud scream exploding in my ear. I looked at Alfred, collapsed on the ground, I bolted towards him, dropping my gun, and gliding at him. I grabbed his wrists and pulled. I dragged him to the edge, my pulse racing. Then suddenly I felt a painful sting in my thigh. It was the most intense pain. I fell to the ground, In severe agony. I was saved from No mans land, the next day, more dead were in the trenches. More unidentified faces. Now I'm here. My leg wrapped up. Alfred dead. What's the point? I can't go back without his support. I couldn't have done it without him. We were always both equal, both men. I realise that now. Recently I got a telegram. Dad, he dies, a day after Alfred. I can't go back to war. I can't. But facing the guilt at home, all the lies, and the deaths. Imagine how she'd feel. I' killed them she'd say. No, I can't go back not on my own. By Naomi Martin 11S1 ...read more.