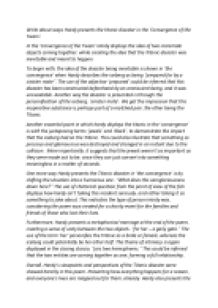 Write about ways Hardy presents the Titanic disaster in the Convergence of the Twain.

﻿Write about ways Hardy presents the titanic disaster in the ?Convergence of the Twain?. In the ?Convergence of the Twain? Hardy displays the idea of two inanimate objects coming together, while creating the idea that the Titanic disaster was inevitable and meant to happen. To begin with, the idea of the disaster being inevitable is shown in ?the convergence? when Hardy describes the iceberg as being ?prepared for by a sinister mate?. The use of the adjective ?prepared? could be inferred that this disaster has been constructed beforehand by an omniscient being, and it was unavoidable. ...read more.

This could also illustrate that something so precious and glamourous was destroyed and changed in an instant due to the collision. More importantly, it suggests that the jewels weren?t as important as they were made out to be, since they can just convert into something meaningless in a matter of seconds. One more way Hardy presents the Titanic disaster in ?the convergence? is by shifting the situation into a humorous one. ?What does this vaingloriousness down here?? The use of rhetorical question from the point of view of the fish displays how hardy isn?t taking this incident seriously, and rather taking it as something to joke about. ...read more.

?for her ? a gaily gate.? The use of the term ?her? personifies the Titanic as a bride or female, whereas the iceberg could potentially be her other half. This theme of intimacy is again displayed in the closing stanza. ?jars two hemispheres.? This could be inferred that the two entities are coming together as one, forming a full relationship. Overall, Hardy?s viewpoints and perspectives of the Titanic disaster were showed harshly in this poem. Presenting how everything happens for a reason, and everyone?s lives are mapped out for them, already. Hardy also presents the theme of nature and uses personification to create a sense that the two objects are in a metaphorical relationship. ...read more.