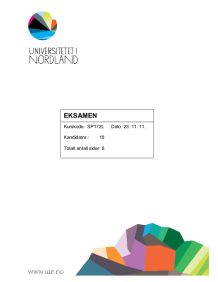 Candidate 18 Dr. Hanssen American Studies SP172L November 23. 2011 Assignment 1: A common theme The novels we've read in the category young adult fiction circles around teenagers. Teenagers go through big changes not only physically but also mentally; they develop their sense of morality and sense of self pride, as well as broadening their perspective of the world. In other words they start growing up, and this is what we find in these stories, stories of teenagers growing up. There are stories of young adults finding their moral limit, finding yourself without your friends, learning what you believe in and seeing a new side of people. I short the common theme in the novels we've read this year is: a personal growth when facing the real world. The differences in the actions our protagonists make at the beginning and ending of the stories show their developed really well. In "the adventures of Huckleberry Finn" there is one decision Huck makes at two points in the story, to go to Hell, but he does it for two very different reasons, the first time because the widow is going to heaven. "Then she told me all about the bad place, and I said I wished I was there. She got mad, then, but I didn't mean no harm [...] She was going to live so as to go to the good place. ...read more.

At the beginning of the story Enid and and by the end, they realize they can't stay that close, and share everything for the rest of their lives. It's the unenviable truth. You can't stay that close to your friends forever, you need to find out who you are apart from them. (R)"...Maybe I shouldn't go with you...-it's kind of sick to follow you like that..."(E)"Yeah, I don't exactly know what to think about it... It all seems kind of unhealthy..."(R)"God, it's really pretty sad when you think about it" (Clowes page 73) Assignment 2: Reader Response Review While we today may consider Huckleberry Finn to be a book for teenagers I believe that when Mark Twain wrote it in 1885 the implied reader was the white upper-class females. This is based on both the historic facts and the themes of the book. Slavery is a huge theme in this book, and even though it was written decades after slavery was abolished the situation hadn't changed all that much. And this book, which was set back in time, is telling a truth about the attitude towards black people. Even descent up standing people in a society like Miss Watson did not care about the cruelty and injustice of selling people and separating them from their families. Language is a big part in his book, Mark Twain makes his characters more authentic and the story more real by using dialects for example Jims Missouri negro dialct and the upper-class speech way spoken by miss watson, the Wilks and many more. ...read more.

And that's why I see their friendship as a 'better' friendship then the one between Huck and Tom in many ways. The intended reader probably wouldn't however because the friendship between Tom and Huck is more correct, they are two white boys at the same age. And I think twain shows the contrasts in the friendships quite well, seeing that the friendship between Tom and Huck hasn't changed all that much despite the changes Huck has made. Their friendship is still driven by the leader/follower aspect. Huck goes along with Toms slow and adventures plan to free Jim. Jim is not an equal in Toms mind, he knows that Jim is a free man but he sees the possibility of an adventure and goes for it. And this shows how much Huck has grown as a person. It's not difficult to identify with Huck, and it's easy to sympathize with him. And even I am reading it in 2011 and the implied reader would read it in 1885 we can both sympathize with Huck escaping from a bad situation and having to leave everything behind. I believe that "the adventures of Huckleberry Finn" has a universal appeal I believe that anyone can understand and enjoy Hucks travel down the river. The story has everything: moral, friendship, social commentary, historical aspects and a likeable protagonist. ?? ?? ?? ?? Candidate 18 - page 1 1 ...read more.