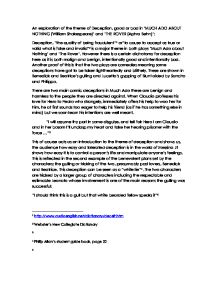 An exploration of the theme of Deception, good or bad in MUCH ADO ABOUT NOTHING (William Shakespeare) and THE ROVER (Aphra Behn)

An exploration of the theme of Deception, good or bad in 'MUCH ADO ABOUT NOTHING (William Shakespeare)' and 'THE ROVER (Aphra Behn)': Deception, "the quality of being fraudulent"1 or"to cause to accept as true or valid what is false and invalid"2 is a major theme in both plays 'Much Ado about Nothing' and 'The Rover'. However there is a certain dichotomy for deception here as it is both malign and benign, intentionally good and intentionally bad. Another proof of this is that the two plays are comedies meaning some deceptions have got to be taken lightheartedly and blithely. These are shown in Benedick and Beatrice's gulling and Lucetta's gypping of Blunt aided by Sancho and Philippo. There are two main comic deceptions in Much Ado these are benign and harmless to the people they are directed against. When Claudio professes his love for Hero to Pedro who strangely, immediately offers his help to woo her for him, he at first sounds too eager to help his friend (as if he has something else in mind) but we soon learn his intentions are well meant. "I will assume thy part in some disguise, and tell fair Hero I am Claudio and in her bosom I'll unclasp my heart and take her hearing prisoner with the ...read more.

There is a certain parallel or mirrored idea in the two plays. Balthasar's song12 is of course echoed throughout Much Ado, it is around deception it speaks, or the deceptive nature of men. This is mirrored through Wilmore's defensive comment after being accused of cheating on Angelica he said "For I never heard of a mortal man, that has not broke a thousand vows"13. In another sense deception can be used to show who is boss, or to show off someone's authority. For example the Prince of Aragon immediately marks his territory in Messina by grabbing the first opportunity he could, and that is through wooing Hero. By wooing Hero for Claudio he showed that he was the dominator or leader figure. Don Pedro also does that with Beatrice and Benedick and he succeeds in creating his "mountain of affection"14 and proof for this is that the pair are lovesick for one another. It is when Leonato falls under Pedro and Claudio's side against his own daughter' that we see the effects of the dominance Pedro gained from his earlier deceptions. Even though Leonato has seen Pedro's deceptive nature in action he still follows him: "Would the two princes lie, and Claudio lie, who loved her so, that speaking of her foulness, washed it with tears? ...read more.

Claudio also deceives himself into believing he is in love with Hero when really he has not even met her. He falls in love with her because of his esteemed first impression of her and mainly because she looks like a pure, good virgin which was considered of great importance in Elizabethan England, a girls honour was entirely based on her chastity, if she loses that she would "lose all social standing" which is why the second thing he asks about her is "is she not a modest young lady?".Don Pedro also deceives himself in thinking his brother, john the bastard has been washed clean and is now a clean and changed man. In reality he is the villain and the person behind every harmful deception in the play. The two plays both exhibit deception in the most ambidextrous of ways. It is both malevolent and benevolent, in the sense that the plays end happily through all the obstacles that have been set throughout it. 1 http://www.audioenglish.net/dictionary/deceit.htm 2 Webster's New Collegiate Dictionary 3 4 Philip Allan's student guide book, page 52 5 6 7 4.2 8 9 Philip Alan's student text guide 10 George Brandes, in John Russell Brown,1979- page 41-42 11 12 Act II, Scene 3 13 14 15 16 Philip Allan updates, page 13 17 18 19 20 21 22 23 24 25 26 ?? ?? ?? ?? ...read more.