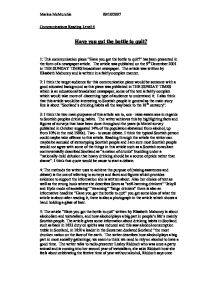 Have You Got The Bottle To Quit

Have you got the bottle to quit?

1: This communication piece “Have you got the bottle to quit?” has been presented in the form of a newspaper article.  The article was published on the 9th December 2001 in THE SUNDAY TIMES broadsheet newspaper.  The article was written by Elisabeth Mahoney and is written in a fairly complex manner.

2: I think the target audience for this communication piece would be someone with a good educated background as this piece was published in THE SUNDAY TIMES which is an educational broadsheet newspaper, some of the text is fairly complex which would take more of  discerning type of audience to understand it.  I also think that this article would be interesting to Scottish people in general as the main story line is about “Scotland’s drinking habits all the way back to the 18th centaury”.

3: I think the two main purposes of this article are to, one - raise awareness in regards to Scottish peoples drinking habits.  The writer achieves this by highlighting facts and figures of surveys that have been done throughout the years (a Mintel survey published in October suggested 14% of the population abstained from alcohol, up from 10% in the mid 1990s). Two - to cause debate. I think the typical Scottish person could maybe take offence to this article. Reading through the article the writer can maybe be accused of stereotyping Scottish people and I am sure most Scottish people would not agree with some of the things in this article such as a Scottish consultant controversially described Scotland as “a nation of drunks” buckling under a “nationally-held delusion that heavy drinking should be a source of pride rather than shame”. I think that quote would be cause to start a debate.

4: The methods the writer uses to achieve the purpose of (raising awareness and debate) is the use of referring to surveys and facts and figures which provides evidence to support the information she is written about. Also her choice of text as well as the strong hook where she describes Scots as “self-harming drinkers” “Jekyll and Hyde mode of socialising” “steaming” “binge drinkers” there is also an informative headline “Have you got the bottle to quit” you get some idea of what the article is about after reading it, there is also a photograph in the article which shows a hand holding a glass of beer.

5: The article “Have you got the bottle to quit” written by Elisabeth Mahoney is about alcoholism and teetotalism, and how alcohol plays a big part in people’s life’s mainly Scottish people. The article gives some information about drinking habits in Scotland such as back in 1823 duty on spirits was reduced and this saw alcohol consumption treble in Scotland, in 1850 a leader in the Scotsman declared Scotland “the most drunken nation on the face of the earth.  The writer describes how alcohol plays a big part in most socially gatherings; we seem to think we need to rely on alcohol to have a good time.  The writer talks to radio presenter Lesley Riddoch who was once a party animal and is coming into her second year of teetotalism, she asks Riddoch how she feels about celebrating the festive time of year without alcohol, Riddoch says once you give up alcohol people expect you to give up socialising but for Riddoch this is not the case, she still goes out and has a good time with friends who are by 3am stopped focusing, falling of stages and talking nonsense while Riddoch much prefers being able to drive herself home at the end of the night.

“Scotland is pickled in drink, it takes going teetotal to see it, and wonder why.”

6: I think the writers feelings about this subject can appear somewhat biased, I think she feels quite strongly about alcohol having a bad impact on our life’s, she also appears to have a negative opinion in regards to Scottish people and alcohol and some her comments such as “It may be that there’s something particularly Scottish about the concept of binging, of excess then abstinence, noisy exuberance followed by guilty, silent self-recrimination” and  “Scotland a nation of drunks, buckling under a nationally-held delusion that heavy drinking should be a source of pride rather than shame” can appear as a personal attack on Scottish people who drink.

7: I think the writer has defiantly achieved the purpose of causing a debate, I personally do not agree with the writers views on Scottish peoples drinking habits, I am a Scottish 24 year old female who have on many occasions went out socialising without alcohol and I am sure there are a lot more people who do the same. I feel she has gave the readers more of a personal opinion rather than giving them information so I feel she was not very successful achieving the second purpose in the third answer of providing information.