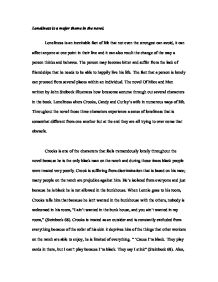 Loneliness is a major theme in the novel.

Loneliness is a major theme in the novel. Loneliness is an inevitable fact of life that not even the strongest can avoid, it can affect anyone at one point in their live and it can also result the change of the way a person thinks and behaves. The person may become bitter and suffer from the lack of friendships that he needs to be able to happily live his life. The fact that a person is lonely can proceed from several places within an individual. The novel Of Mice and Men written by John Steibeck illustrates how lonesome accurse through out several characters in the book. Loneliness alters Crooks, Candy and Curley's wife in numerous ways of life. Throughout the novel those three characters experience a sense of loneliness that is somewhat different from one another but at the end they are all trying to over come that obstacle. Crooks is one of the characters that feels tremendously lonely throughout the novel because he is the only black man on the ranch and during those times black people were treated very poorly. ...read more.

He's greatest fear is that once he is no longer able to help and continue cleaning up he will be asked to leave by the boss, however the boss is keeping Candy on as long as he can "swamp" out or clean the bunkhouse. The only friend Candy had was his old dog and just like him he has lived beyond his usefulness. His dog was a sheep herder but then became toothless, smelling and old "Got no teeth...He's all stiff with rheumatism. He ain't no good to you, Candy. An' he ain't no good to himself. Why'n't you shoot him, Candy" (Steinbeck 44). When Carlson suggests that its time to put Candy dog out of its misery, Candy became sad and he gave Carlson the responsibility and permission to do so. The dog's death reflects that like it, Candy will soon be useless to his boss and he might risk being fired, he's an example of what would happen to anyone on the ranch. When Candy lost his dog, he also lost a dear friend who he had raised since he was a pup "I had him so long. ...read more.

It is evident that she is insecure by the way she dresses up "She had full, rouge lips and wide-spaced eyes heavily made up. Her fingernails were red. Her hair hung in little rolled clusters, like sausages. She wore a cotton house dress and red mules, on the insteps of which were little bouquets of red ostrich feathers" (Steinbeck 31). She feels she must dress this way for people to acknowledge her presence and to attract attention. The lack of love and affection that she should get from her husband Curley makes her seek it from other people surrounding her on the ranch. Acting in flirtatious ways is the only way Curley's wife believes that she can deal with her loneliness. The novel Of Mice and Men illustrates the loneliness that was present in California during 1930's after the Great Depression, Steinbeck the author shows us how people tried to find or even build up friendships in order to flight from loneliness. Many of the characters in the novel were isolated from the society which made them incapable to be sociably compatible such as, Candy, Crook and Curley's wife. They were affected by loneliness in enormous ways, however they tried to establish companionship which was necessary in order for a person to live an enjoyable life. ...read more.