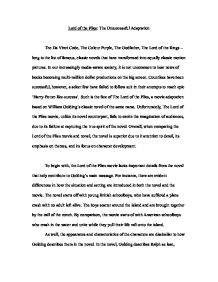 Lord of the Flies: The Unsuccessful Adaptation

Lord of the Flies: The Unsuccessful Adaptation

The Da Vinci Code, The Colour Purple, The Godfather, The Lord of the Rings – long is the list of famous, classic novels that have transformed into equally classic motion pictures. In our increasingly media-aware society, it is not uncommon to hear news of books becoming multi-million dollar productions on the big screen. Countless have been successful, however, a select few have failed to follow suit in their attempts to reach epic ‘Harry-Potter-like-success’. Such is the fate of The Lord of the Flies, a movie adaptation based on William Golding’s classic novel of the same name. Unfortunately, The Lord of the Flies movie, unlike its novel counterpart, fails to excite the imagination of audiences, due to its failure at capturing the true spirit of the novel. Overall, when comparing the Lord of the Flies movie and novel, the novel is superior due to it attention to detail, its emphasis on themes, and its focus on character development.

To begin with, the Lord of the Flies movie lacks important details from the novel that help contribute to Golding’s main message. For instance, there are evident differences in how the situation and setting are introduced in both the novel and the movie. The novel starts off with young British schoolboys, who have suffered a plane crash with no adult left alive. The boys scatter around the island and are brought together by the call of the conch. By comparison, the movie starts of with American schoolboys who crash in the water and unite while they pull their life raft onto the island.

As well, the appearance and characteristics of the characters are dissimilar to how Golding describes them in the novel. In the novel, Golding describes Ralph as lean, athletic, blonde, and with a ‘golden body’ (p. 11). Piggy is described as fat and asthmatic, while Jack is a fiery, freckled, unattractive, red head. However, in the movie, Ralph is fits the stereotype of an All-American, curly headed, skinny boy. Piggy, though still large in the movie, is not asthmatic in the movie. Jack, in the movie, is a bleach-blonde, able-bodied, and attractive character. Overall, the movie fails to capture tiny details from the novel such as the nationality of the boys, which, though is seemingly minor, changes the impact of the story on audiences.

Secondly, the movie fails to capture the important themes and conflicts as successfully as the book. For example, in the novel, the Piggy’s isolation from the group can be clearly seen since the Golding offers an omniscient view into Piggy’s thoughts.  The theme of adaptability is shown in the novel, especially with Jack, as the boys gradually adapt to life on the island with them constantly going off on their own to explore the jungle. The theme of corruption is also well captured in the book as Golding shows the boys’ gradual descent to savagery and the formation of the new tribe. In contrast, the movie does not have an in-depth look at Piggy’s emotions since it only analyzes Piggy from the third-person. The movie also shows a sudden, abrupt, adaptation of the boys to the island. In one scene, they are civilized American boys, in the next scene, they are dirty, ragged children climbing trees.  As well, unlike the novel, the movie fails to show the boys’ slow descent to corruption. Instead, their movement to form Jack’s tribe is shown in one scene as a sudden act of rash rebellion. This is accurate, just like the movie’s depiction of the conflicts in the book.

As well, the movie, unlike the novel, fails to fully the depict the conflicts that arise in the story. In the novel, there is a clear case of Man vs. Society where Ralph is utterly alone against the entirety of Jack’s tribe and he goes through emotional distress and conflict. Also in the novel, there is a focus on Man vs. Self where the boys become paranoid and scared. They start to doubt their safety in the island and many of them, especially the younger ones, face internal battles with fear and panic. On the other hand, the movie does not show the depth of Ralph’s conflict of Man vs. Society since this is only captured in one scene where Ralph is being chased by Jack’s tribe at the end. Instead of a strong focus on Man vs. Self, the book fails to give an insight on the emotions and inner battles the boys face in their time on the island.

Lastly, the novel succeeds in showing full character development, unlike the movie. One example of this is the character development of Ralph in the novel. Ralph matures into a leader, proving that though he does not have Piggy’s intellect, he is rational and morally sensible. Ralph is susceptible to the same temptations as the other boys but he rises above them and remains civilized. In the movie however, Ralph is automatically portrayed as born leader, instinctually righteous and rational. The movie fails to show how Ralph grows into these characteristics, and how, at times, he falters and makes mistakes like failing to defend Piggy from Jack’s verbal attacks. The movie depicts Ralph as a civilized chief from the beginning, which is not accurate. The movie makes similar mistakes with the representation of Jack.

Jack Merridew is also an example of full character development in the novel. He is introduced as an eager and bossy boy. Throughout the novel, he develops into a disciplined, militaristic, authoritarian, ruler. He slowly develops to portray calculation, accuracy, and anarchy in the novel. In the movie however, is instantly introduced as the sinister, archetypical, ‘villain’, of the story. The movie does not show how Jack, though mean, is just a misguided child in the beginning. The movie is quick to paint Jack is intrinsically evil and sadistic, without any attention to how he develops into the authoritarian leader.

Throughout the movie, it is evident that in an effort to make an entertaining and streamlined blockbuster, the creators of the Lord of the Flies movie failed to capture the true spirit and meaning of Golding’s novel. With its attention to detail, emphasis on themes, and focus on character development, the novel proves to be superior to the movie. Though it can be commended that the movie did follow the general plot of the novel, it failed to reach the success that is generally expected from movies based on novels. The Lord of the Flies movie, through its failure, is a testament to how William Golding’s novel is full of genius. Its incapability to portray the profoundness of Golding’s novel lives to show the importance of Golding’s message to society, and how this message cannot simply be translated onto film.