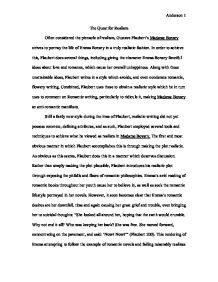 Often considered the pinnacle of realism, Gustave Flaubert’s Madame Bovary strives to portray the life of Emma Bovary in a truly realistic fashion. In order to achieve this, Flaubert does several things, including giving the character Emma Bovary fanciful ideas about love and romance, which cause her overall unhappiness. Along with these unattainable ideas, Flaubert writes in a style which avoids, and even condemns romantic, flowery writing. Combined, Flaubert uses these to obtain a realistic style which he in turn uses to comment on Romantic writing, particularly to ridicule it, making Madame Bovary an anti-romantic manifesto.

Still a fairly new style during the time of Flaubert, realistic writing did not yet possess concrete, defining attributes, and as such, Flaubert employed several tools and techniques to achieve what he viewed as realism in Madame Bovary. The first and most obvious manner in which Flaubert accomplishes this is through making the plot realistic. As obvious as this seems, Flaubert does this in a manner which deserves discussion. Rather than simply making the plot plausible, Flaubert introduces his realistic plot through exposing the pitfalls and flaws of romantic philosophies. Emma’s avid reading of romantic books throughout her youth cause her to believe in, as well as seek the romantic lifestyle portrayed in her novels. However, it soon becomes clear that Emma’s romantic desires are her downfall, time and again causing her great grief and trouble, even bringing her to suicidal thoughts: “She looked all around her, hoping that the earth would crumble. Why not end it all? Who was keeping her back? She was free. She moved forward, concentrating on the pavement, and said: ‘Now! Now!’” (Flaubert 200). This rendering of Emma attempting to follow the example of romantic novels and failing miserably realizes more than Flaubert’s goal of realism, it exposes the fallacies in romantic writing and evokes a feeling of contempt for that style. Also, this ridiculing of romanticism recurs throughout the book, rather than simply appearing once within the plot, from Emma’s disappointment in her marriage in part one to her “stuffing [arsenic] into her mouth” (Flaubert 293) in part three. This consistency throughout the novel truly makes the absurdity of romanticism stick out, while also greatly contributing to the realistic style of the novel.

In addition to the obvious element of plot, Flaubert stylizes Madame Bovary in manner which subtly, yet undeniably gives his novel a realistic feel while concurrently condemning romanticism. Unlike the flowery, idyllic language which was common in books during his time, Flaubert wrote in a detached, unemotional tone, describing even the most powerful scenes in an indifferent and almost bored manner:

One day, as she was straightening up a drawer in preparation for moving, she pricked her fingers on something. It was an iron wire from her wedding bouquet. The orange blossoms were yellow with dust and the silver-bordered satin ribbons were fraying at the edge. She threw it into the fire. It flared up faster than a dry straw. Then it looked like a red bush on the ashes, slowly disintegrating. She watched it burn. The little cardboard berries burst, the brass wires twisted, the braiding melted; and the shriveled paper petals fluttered on the grate like black butterflies, then flew up the chimney. (Flaubert 83-84)

This scene, which depicts Emma burning her wedding bouquet, is described in great detail, yet with almost no emotion. This shows a great deviation from romanticism, which is exactly what Flaubert is aiming for; by writing in a style which is nearly a complete opposite to it, Flaubert provides an alternate viewpoint which helps to point out the flaws in romanticism. Flaubert further deviates from romantic style by describing many scenes down to the most mundane details; even spending the first four pages of part two chapter one describing Yonville-l’Abbaye. Writing in this style provides a vivid picture of exactly what is occurring in the scene, while also mimicking the monotony of life, which holds importance, for despite being fairly boring in terms of storyline; this demonstrates Flaubert’s disgust with romanticism and his choice to go in the complete opposite direction of it. This meticulous and largely unbiased writing style provides a great amount of power to Flaubert through which to ridicule romanticism, and contributes to Madame Bovary’s status as an anti-romantic manifesto.

While it would seem in the large scheme of things that Flaubert’s anti-romanticism and how he achieves it is unimportant, these actually hold a significant amount of importance; this holds especially true in the literary world, as they represent the beginning of a new style of writing, and provide some of the defining features of realism, essentially helping to lay the ground work for a new form of writing. Yet even beyond this, Madame Bovary provides more than just a defining example of realism, it provides a message, an idea that it is the duty of an author to depict truth, and not idyllic, unrealistic worlds; that romanticism is more than simply impracticable, but morally wrong. This revolutionary idea took hold in part because of Flaubert’s Madame Bovary, and the devices and styles used within it: Flaubert wrote more than just a book, he wrote a manifesto, and without it, writing would not be what it is today.