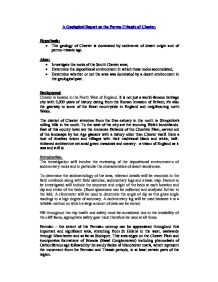 A Geological Report on the Permo-Triassic of Chester.

A Geological Report on the Permo-Triassic of Chester. Hypothesis: * The geology of Chester is dominated by sediments of desert origin and of permo-triassic age. Aims: * Investigate the rocks of the South Chester area; * Determine the depositional environment in which these rocks accumulated; * Determine whether or not the area was dominated by a desert environment in the geological past. Background Chester is located in the North West of England. It is not just a world-famous heritage city with 2,000 years of history dating from the Roman invasion of Britain; it's also the gateway to some of the finest countryside in England and neighbouring north Wales. The district of Chester stretches from the Dee estuary in the north to Shropshire's rolling hills in the south. To the west of the city are the stunning Welsh borderlands. East of this county town are the immense flatlands of the Cheshire Plain, carved out of the landscape by Ice Age glaciers with a history older than Chester itself. Here a host of timeless towns and villages with their traditional black and white, half-timbered architecture set amid green meadows and scenery - a vision of England as it was and still is. Introduction. The investigation will involve the reviewing of the depositional environments of sedimentary rocks and in particular the characteristics of desert sandstones. To determine the sedimentology of the area, relevant details will be recorded in the field notebook along with field sketches, sedimentary logs and a base map. Factors to be investigated will include the sequence and origin of the beds at each location and dip and strike of the beds. ...read more.

Fig.6 The exposed cliff face in Fig.6 showed the beds to be completely composed of a cyclic sequence as the haematite and limonite are repeated as seen at previous locations. In Fig.6 it is apparent that areas of this have been weathered back and a major bedding plane can be seen almost horizontal. Current bedding is similar to that seen at location 2, showing the formation of sand dunes. Haematite beds consisted of small angular pebbles whilst the limonite was thinly bedded in between the other surrounding beds. The dip is in still in a South East direction with a large joint present measuring almost 7 metres. This joint could possibly be separate beds joined together. The dark area to the right of Fig.6 was caused by pollution from the city which resulted in the deposition of this material onto the rock face. This causes problems as the structure of the beds are difficult to see, and cannot be analysed fully. A sedimentary log was completed here as this location best displayed the fullest development of succession in comparison to the previous locations. The succession of the cliffs was recorded on a sedimentary log sheet and the characteristics of the rock types were noted as follows: Specimen 1: Specimen 2: Location 4. (GR 400600) This was the final location investigated, and was situated approximately 500 metres from location 3. Fig.7 Fig.7 shows the sediments in close up, the rocks are dominated by sand and phenoclasts - which have been shaped by the wind. ...read more.

This transgression worked as a cycle producing the layered cliffs. These were then exposed when sea levels changed. The cliffs have experienced much recognition; this is due to the nature of the rocks from which it composed. Both the limestone and the shale are relatively unconsolidated and soft they are therefore easily eroded by the action of waves and rocks, these often undercut the bottom layer of the cliff causing it to become unsupported and eventually collapse. The shale layers are also a major factor leading to the cliffs collapse. They create a layer of fluidity when wet; the cliffs have a slight dip of 8-10� towards the north, when the shale layer becomes fluid it will move in the direction of the dip taking the overlaying layers with it. The techniques used to protect the cliffs are blocks of Hornfels and Quartzite and Groynes. The blocks of hornfels and quartzite are chosen because of their characteristics. Both are metamorphic rocks, they are extremely hard and resistant rocks and therefore able to with sand the erosive effects of the sea and protect the cliffs. They are uncreative rocks and will therefore not dissolve in the way that limestone does, they do not absorb much water (low porosity) and will not become plastic like clay. The rocks were piled up along the coast in front of the cliffs to stop the seawater hitting them and causing further recession. These arid conditions resulted in the oxidization of the sediments giving them their distinctive red coloration. Permo - Triassic. A period of continental desert sedimentation, initially contemporaneous with waning Hercynian igneous activity, and governed both by pre-existing Armorican highlands to the west and southwest, and N/S extension resulting in E/W trending faults. ...read more.