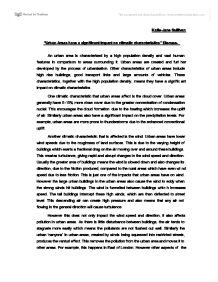 Urban Areas have a significant impact on climatic characteristics Discuss.

For example, in 1990s tough regulations were imposed on levels of airbourne pollution, particularly on the levels of PM10s in the atmosphere. Overall this urban pollution and smog can trap outgoing radiant energy, showing the significant impact on the temperature - a climatic characteristic. Another impact that urban areas have is on the humidity. Overall relative humidity is lower in cities than surrounding area, showing a significant impact. It is 2% less in winter and 8% less in summer due to the rapid disposal of water, meaning less surface water. This is because there are fewer areas of water and less vegetation, reducing rates of evapotranspiration. However at night, the urban area maintains its humidity whereas the air cools more quickly in rural areas and moisture is lost to dew. Overall the impact of urban areas is significant, as seen by the figures. The main reason for this is the constant attempt to reduce surface water, for example by drains, in urban areas. However this presence of water in urban areas has a significant impact on the temperature of urban areas also. ...read more.

This is a good example of the impact of human activity on urban climate. The impact of this activity is so great that it affects several climatic characteristics. However the significance of these depends on where the urban area is located, for example. One example of this is that cities in North America have greater temperature difference than cities in Europe. This is due to the higher number of high density buildings in Europe. Similarly, there is greater city planning in North America. This shows that, although urban areas have an impact on climatic characteristics, it may depend on the location. Another factor that may affect the significance of the impact is the amount of anthropogenic heat. These activities will inject heat into the canopy layer and upper boundary layer, however the amount of activity may depend on the urban area. For example, some areas are now trying to encourage the use of public transport, suggesting a decline in heat released from vehicles and therefore anthropogenic heat. In conclusion, it is clear that Urban Areas have a significant impact on climatic characteristics, particularly on the temperature. However this temperature and urban heat island is a result of several factors and the greatness of these factors will affect the significance of the impact. ...read more.

This answer covers many of the main points which would be expected. It includes some relevant geographical terminology. At various points better and more detailed explanations would improve the answer. Also, a detailed case study of a particular urban area (or areas) would be of benefit. It has tried to address the idea of what is a "significant impact", which is good.