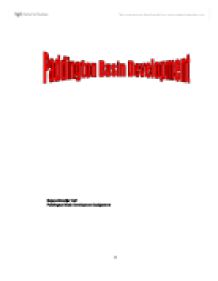 A report concerning new business development in the local area, which is the Paddington Basin Regeneration Project. As this development will have many different and significant environmental impacts

Bojana Simulija 13A1 Paddington Basin Development Assignment INTRODUCTION For this assignment our group is requested to write a report concerning new business development in the local area, which is the Paddington Basin Regeneration Project. As this development will have many different and significant environmental impacts, it is our group's objective to further investigate the effects of this development on the local residents. We are aiming to explore the background to the development, the effects on the environment, the social costs and benefits in terms of quality of life indicators. Additionally the various stakeholders (in our case local residents), and also pressure groups involved. Furthermore, legal constraints or government intervention which would evidently effect this development, are other key areas our group shall consider in order to gain a clear insight into the benefits and drawbacks as a result of this development. As stated on the Paddington Basin Development website, Paddington Basin is no longer simply a major regeneration opportunity, and is fast establishing itself as a premier business, residential, healthcare and leisure district of central London. It offers unrivalled, first class opportunities and its position in the central London and links with west London make it a perfect location for international business modern living and unsurpassed life style. The last few years have seen foremost changes at Paddington Waterside. The first places of development at Paddington Central and Paddington Basin are complete and major corporate occupiers and residents are enjoying their exciting new environment. This attraction development is supposed to provide a balanced mix of offices, homes, shops, restaurants, leisure facilities and a spectacular 300m waterfront alive with activity and of outstanding quality. Paddington Basin will create a world - class, fully integrated living and working environment. As I previously mentioned, there are a number of different organisations and stakeholders that will be involved and affected by the development. OPEN QUESTIONNAIRE ANALYSIS By looking at the previous, closed questionnaire our group conducted, we can clearly note than 46% of the people interviewed, responded that the Paddington Basin Development has affected their lives. ...read more.

This is how pressure groups could be formed. If a great number of people show their worries and disappointment they will ultimately join mutually to influence others with their common beliefs, so that they demand changes and improvements in the business's project and processes. If pressure groups were formed, there are certain aspects of the development that they would consider environmental costs and benefits. For instance, environmental costs might include: * Noise: evidently, there will be an increase in the amount of noise coming from the development during building. This is clearly a negative side of the development as it disturbs the natural peace of the environment that can be extremely essential to many people. However, this is a short-term effect, as the noise of the construction and the developers will lessen once the project has finished. * Pollution: there are two types of pollutions that can be mentioned here, air and environmental pollution. I believe that this is a major concern to the public and could be an enough reason to trigger them to form a pressure group. Air pollution has augmented due to the increased number of people moving to and fro the local area, who use some sort of transport to get there. This is causing the pollution to increase and further frustrate the local public. However, they can decide to rate this as a short or long-term effect, because even though the air pollution will decline after the development has been completed, some people are aware that it will not utterly disappear. This is because, even after the building process, the average number of people who are obliged to come into the area, is increased. Another negative aspect arrives from this, which is the rise of crowded areas in the surroundings. This is evidently an environmental cost that might be measured as a long or short-term effect, due to the different opinions of the people. ...read more.

I feel she is neutral and does not have biased opinions towards the developers or the residents with children. Naturally she would want them to enjoy their new area. Presentation by Edward Fox, British Waterways,(environmental costs and benefits) I consider this information was very easily accessible as the presentation was organised successfully and it was very useful. The information given by the presenter was I believe reliable and trustworthy as he has direct involvement with the developers. Possibly this is the reason it can be slightly biased as he wants to promote their project and his company's involvement to us. AVCE Business Studies, Sir Neulle Sims, (environmental legislation) I had easy access to this information as it was found in our A2 book for Business Studies. I believe that as a chief executive of a construction company he is obliged to be concerned and pay attention to environmental impact. I do not think his statement was biased as he shows his concern for the environment from any project not only Paddington Basin Development. This information is quite reliable because the book is a new updated edition, thus I believe it can be trusted. www.google.com ,Environmental Acts,(environmental legislation) This information was incredibly hard to reach. The Internet website gave far too much detail and it was difficult to edit and take what was important and relevant to me. I believe it was however reliable and not biased because it does not change in much detail. The information about Environmental Acts remains the same for a long time. A-Level Business by Susan Blanch and Neil Denby, (environmental legislation) This was easy to attain as the information was placed in the book I use regularly for A2 Business Studies. Additionally, I think it is reliable, as it is once again a new updated edition. I feel it was objective because the information given was not directly related to this project yet it was general information that can be linked to different aspects. ?? ?? ?? ?? 1 ...read more.