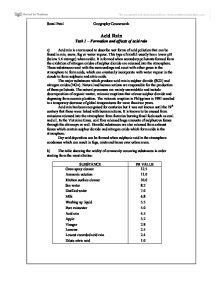 Acid Rain Task 1 - Formation and effects of acid rain a) Acid rain is a term used to describe wet forms of acid pollution that can be found in rain, snow, fog or water vapour. This type of rainfall usually has a lower pH (below 5.6 average) when acidic. It is formed when secondary pollutants formed from the oxidation of nitrogen oxides of sulphur dioxide are released into the atmosphere. These substances react with the surroundings and react with other gases in the atmosphere to form acids, which can eventually incorporate with water vapour in the clouds to form sulphuric and nitric acids. The major substances which produce acid rain is sulphur dioxide (SO2) and nitrogen oxides (NOx). Natural and human actions are responsible for the production of these pollutants. The natural processes are mainly unavoidable and include decomposition of organic matter, volcanic eruptions that release sulphur dioxide and degassing from oceanic plankton. The volcanic eruption in Philippines in 1991 resulted in a temporary decrease of global temperatures for more than two years. Acid rain has been recognised for centuries but it was not known until the 19th century that these were linked with human actions. It is known to be caused from emissions released into the atmosphere from factories burning fossil fuels such as coal and oil. In the Victorian times, coal fires released huge amounts of sulphurous fumes through the chimneys as well. Harmful substances are also released from exhaust fumes which contain sulphur dioxide and nitrogen oxide which form acids in the atmosphere. Dry acid deposition can be formed when sulphuric acid in the atmosphere condenses which can result in fogs, mists and hazes over urban areas. b) The table showing the acidity of commonly occurring substances in order starting from the most alkaline: SUBSTANCE PH VALUE Oven spray cleaner 12.5 Ammonia solution 11.0 Kitchen surface cleaner 10.0 Sea water 8.2 Distilled water 7.0 Milk 6.8 Washing up liquid 5.5 Pure rainwater 5.0 Acid rain 4.5 Apple 3.2 Vinegar ...read more.

Nitrogen oxides are responsible for the same as natural but if all this were decreased we would not have as much polluting our atmosphere. It is about time we realised the pollution we are causing to our environment. Task 3 - Acid rain between countries a) On the next pages... b) My graph shows that Germany, United Kingdom, Poland and Italy have the highest emissions and Poland, Germany, United Kingdom and France have the highest depositions. Sweden, Austria, Switzerland and Norway have the lowest emissions and Belgium, Netherlands, Denmark and Switzerland have the lowest depositions. My graph tells me that depositions are normally found thousands of miles away from where it was produced and can have severe effects where deposited. Also countries with a larger population are also releasing more emissions. c) On the next pages... d) My graph on the percentages of sulphur received in European countries tells me that areas across Eastern Europe are suffering the most. United Kingdom, which emits the most sulphur dioxide, seems to receive the less because all of its pollution is being blown by the wind across Europe. This makes countries like Norway, Austria, Sweden and other parts of Scandinavia very vulnerable to acid deposition. Norway, Austria, Sweden and Switzerland have the highest percentage of sulphur received in which most of it probably does not originate in these countries at all. Czech Republic, Italy, Germany and United Kingdom have the least sulphur dioxide received from other countries. e) The explanations for the differences between the highest and lowest figures on the graphs and map 1 are that MEDC's such as Germany and United Kingdom have plenty of money to build power stations and buy fossil fuels from abroad. This is how huge amounts of emissions are released, mainly from MEDC's building so many power stations. Smaller countries, with the least population like Norway want to preserve their environment and trees but are the ones suffering the most of the depositions. ...read more.

c) Some countries are working together to solve the problem by enforcing laws and agreements. For example, the United Nations Economic Commission for Europe (UNECE) aimed to reduce SO2 emissions by 30% under the leadership of countries in Eastern Europe. Also some countries are willing to help pay for specialist equipment used to tackle emissions for other countries who suffer their depositions. Japan, after producing huge amounts of emissions affecting China, is paying for the damage and equipment used to monitor acid rain there. Since the 1970's, many countries have recognised the effects of acid deposition. Many agreements and targets have been signed, set and reached by numerous countries in this time. In 1983, 19 countries aimed to reduce SO2 emissions by 30% and all the countries met this target. Just recently, the United Nations Framework Convection on Climate Change signed by 160 countries is the largest agreement aiming to reduce greenhouse gases. d) The best way to solve the acid rain problem for the future is to simply reduce our emissions. There is no reliable solution to reduce or solve the problem; adding lime to lakes will not bring back all the life lost. Most of the emissions do not disappear from the atmosphere for about 100 years so it is important to reduce as much as possible. The main principle is that renewable energy can cost a lot more than non-renewable sources. If we all worked globally to reduce our emissions in the first place, there would not be any further costs. This can be done by changing the way we live and behave and many people are currently against changing their lifestyle, but to save the Earth, is our lifestyle that important? If emissions were reduced, the ozone hole wouldn't get larger and the emissions of greenhouse gases wouldn't affect the Earth as much as natural sources do. Thinking globally can make a big difference to the Earth's climate as global warming is going to affect the whole world anyway. Sonal Patel Geography Coursework ...read more.