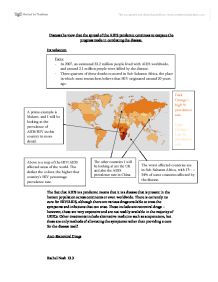 Discuss the view that the spread of the AIDS pandemic continues to outpace the progress made in combating the disease. Introduction The fact that AIDS is a pandemic means that it is a disease that is present in the human population across continents or even worldwide. There is currently no cure for HIV/AIDS, although there are various drugs available to treat the symptoms and infections that can arise. These include antiretroviral drugs - however, these are very expensive and are not readily available in the majority of LEDCs. Other treatments include alternative medicine such as acupuncture, but these are only methods of alleviating the symptoms rather than providing a cure for the disease itself. Anti-Retroviral Drugs Antiretroviral drugs are the main treatment available for HIV and AIDS. There is no cure for HIV/AIDS, but the drugs help to treat and control any symptoms and diseases that may arise from having AIDS. Antiretroviral drugs are designed to keep the amount of HIV in the blood at a low level, which prevents the immune system weakening and allows it to recover from any damage already caused by HIV. Timeline of HIV/AIDS ~1930 - HIV transfers to humans in Africa. ~1970 - HIV enters the United States. ...read more.

AIDS in China There are an estimated 700,000 people in China currently living with HIV, with approximately 75,000 AIDS patients. Last year around 39,000 of the 1,300 million population died from AIDS and related diseases. This estimate is lower than the previously published estimate of 840,000 in 2003. However, this may not be due to prevalence of the disease falling, but due to better methods of data collection and estimation. Initially characterised by denial and inaction, the Chinese government has recently realised the danger of ignoring HIV/AIDS and has initiated a broad programme to tackle the epidemic. In recent years, China has introduced HIV/AIDS into the curriculum regarding sex education in schools, in the hope that this will bring down the number of affected people. There are also various clinics across each region to help raise awareness of the disease, and many other methods of raising awareness, such as displaying messages on university buses, have been put into practice. Before 2003 far fewer people with HIV/AIDS in China had access to anti-retroviral drugs, and medical knowledge about the virus was limited. However, when the Chinese government launched China CARES (China Comprehensive AIDS Response) in 2003, a community-based HIV treatment, care and prevention programme, this changed. ...read more.

However, it was evident from a video we watched that people did not care whether they gave HIV to somebody through unsafe sex - it is clear that the majority in Zimbabwe are still in denial. Luckily in MEDCs, education about HIV/AIDS is routine in most schools and colleges, and the methods of spreading the disease are widely acknowledged and understood. However, although the AIDS pandemic could be eradicated one day in the future, there is still the trouble of migrants from other countries bringing the disease with them, and there being another outbreak. For this reason, I do not think it is likely that HIV/AIDS will be eradicated anywhere in the world until a vaccine is developed against the disease, and even then, vaccines are not a foolproof method of totally eradicating the disease, as some people can be immune to the vaccine. Progress is being made in some LEDC countries, such as Uganda. The number of reported HIV cases has dropped from 44% in 1989 to 23% ten years later, and is still declining. Uganda's government have a high level of commitment in tackling the disease, and the country is also very open about its epidemic, not in denial like some other Sub-Saharan African and Asian countries. ?? ?? ?? ?? Rachel Nash 13.3 ...read more.