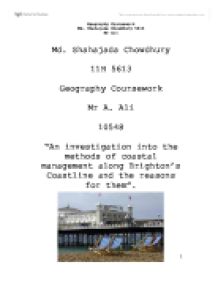 &quot;An investigation into the methods of coastal management along Brighton's Coastline and the reasons for them&quot;.

This could be because of the fact that waves were constantly bashing the beach and the stones were constantly being moved. Therefore the rounded and the angular stones could be anywhere on the beach, there was no pattern. The results on the other hand tell me that the larger stones were further up the beach and the smaller ones were closest to the shoreline. For example at 0 metres the sizes of the stones were 25; 24; 28; 21; 18; 10; 15; 13; 14 and 25 millimetres. This was to be considered relatively small. In comparison at 35 metres the stones were much larger as they were 45; 35; 75; 40; 51; 49; 35; 40; 50 and 32 millimetres. The reason why, was the fact that material was sorted along the beach profile by the wave energy. For instance, large stones will be at the top of the beach profile as they were larger and when they were dumped at the top by the swash, the backwash won't have the sufficient amount of energy to bring them down. The swash will be able to put them at the top because the top of the wave will not be affected by the friction which occurs between the sea bed and the waves. Large pebbles will be in the middle as; once the swash dumps them at the top the backwash will be able to bring them down but not too much or as a result they will be in the middle. Finally, the small pebbles will be dragged down completely by the backwash as they were smaller and lighter as a result they will be nearer to the shoreline. Surveys; Questionnaires and Photos etc:- This hypothesis is about tourism and if it is important to Brighton's economy. In order to test this hypothesis we were asked to do some experiments. These included such things as surveys, questionnaires and taking photos etc. ...read more.