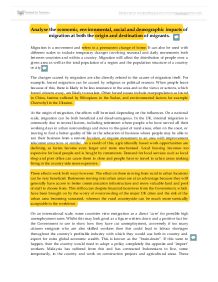 Analyse the economic, environmental, social and demographic impacts of migration at both the origin and destination of migrants.

Analyse the economic, environmental, social and demographic impacts of migration at both the origin and destination of migrants. Migration is a movement and refers to a permanent change of home. It can also be used with different scales to include temporary changes involving seasonal and daily movements both between countries and within a country. Migration will affect the distribution of people over a given area as well as the total population of a region and the population structure of a country or city. The changes caused by migration are also directly related to the causes of migration itself. For example, forced migration can be caused by religious or political reasons. When people leave because of this, there is likely to be less resistance in the area and so the views or actions, which forced citizens away, are likely to escalate. Other forced issues include overpopulation as found in China, famine suffered by Ethiopians in the Sudan, and environmental factors for example Chernobyl in the Ukraine. At the origin of migration, the effects will be mixed depending on the influences. On a national scale, migration can be both beneficial and disadvantageous. In the UK, internal migration is commonly due to several factors, including retirement where people who have served all their working days in urban surroundings and move to the quiet of rural areas, often on the coast, or moving to find a better quality of life or the relocation of business where people may be able to run their business from a remote location, or require movement to an area with improvement telecommunications or similar. ...read more.

Firstly, the adult males may have died, maybe through war or natural disaster, with the wife outliving her husband. Secondly, the majority of women are without men because of migration. The men may have moved to other areas in search of better living standards for themselves or their family, better job prospects, or other economic advantages with which they can support the family elsewhere. An example of this occurring was the mass movement of young unmarried Irishmen last century. The average age of marriage for women rose and resulted in an ever-increasing proportion of those who never married, which will have affected the country severely. The population would have shrunk with a smaller male population and less couples producing families to continue replacement, and so birth rate falls. The environment will also be affected. If the area was heavily agricultural, then the effect of people moving away will be such that their will be less man-power in the area to tend to the land. This means that the land would be left unused and produce in the area will decline. In areas where subsistence farming is common, this would spell disaster for local residents whose food supply would diminish. If land is left unused then it loses its fertility therefore it is unlikely that the land would be able to be used to the same extent later on. ...read more.

Hartman, of the London School of Economics stated that, "Some argue that population growth is the greatest single limit to economic growth and the continued survival of the earth's ecological systems." In other words, scarcity of resources is made worse by the increasing demand from a growing population for resources such as water, fuel, and a clean environment. In reality, this resource scarcity can lead to enhanced conflict and "the breakdown on cooperative action". Such stresses can have a negative effect of health and changing consumption patterns and can also lead to wars and violent conflict leading to increased migration and the creation of so called 'environmental refugees'. The social impact of migrants is probably the most contentious and important. International migration can lead to racial tension. Despite the enrichment of the country brought about by immigrants (artistic, theatrical, sporting, commercial, administrative and industrial, for example), resentment and even anger can be directed at such groups who see themselves as 'long-standing' citizens, resulting in racism. It is often directed at easily identifiable groups and this behaviour is likely to be brought about by the unfortunate desire for individuals to protect their territory. At best, the situation fades out as the groups are accepted into society. At worst, the racism holds that the immigrants, no matter how long-standing they may be, are a threat to the well being of the nation, and are encouraged by one means or another to leave. If the group is not socially resilient, then there should, theoretically, be no problem with racism on any level. ?? ?? ?? ?? Nick Dunn ...read more.

This is a fair attempt at a wide-ranging question. It covers some of the big ideas and includes some relevant examples. It could be improved by having a more logical structure which addresses the key words from the question. As its stands it is not clear whether or not it has covered all four types of impact in both the origin and the destination. The author should use the key words from the question more frequently, and the lack of a conclusion is a significant weakness.