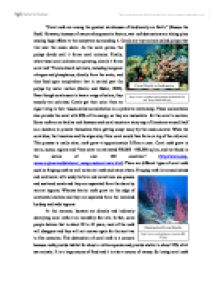 Anthropocentric factors that affect the coral reefs in the Thousand Islands

"Coral reefs are among the greatest storehouses of biodiversity on Earth." (Rescue the Reef) However, because of many anthropocentric factors, vast reef destructions are taking place causing huge effects to the ecosystem surrounding it. Corals are tiny animals called polyps that live near the ocean shore. As the coral grows, the polyps divide until it forms coral colonies. Finally, when these coral colonies are growing, slowly it forms coral reef. "Corals absorb nutrients, including inorganic nitrogen and phosphorus, directly from the water, and they feed upon zooplankton that is carried past the polyps by water motion (Castro and Huber, 2000). Even though corals seem to have a range of colors, they actually are colorless. Corals get their color from an algae living in their tissues called zooxanthellae in a symbiotic relationship. These zooxanthelae also provide the coral with 80% of its energy, so they are mutualistic for the coral to survive. Some reefs are as hard as rock because each coral secretes a stony cup of limestone around itself as a skeleton to prevent themselves from getting swept away by the ocean current. When the coral dies, the limestone and the algae stay. New coral would then form on top of the old coral. This process is really slow; reefs grow at approximately 2.03cm a year. Coral reefs grow in warm, sunny, regions and "they cover an estimated 300,000 - 600,000 sq km, and are found in the waters of over 100 countries." ...read more.

Low income in community is the base of this cause because it contributes to coral mining and dredging for free material of house constructing. 75% of population in The Thousand Islands works as traditional fishermen, as shown in the picture on the right, who are fully dependant on nature, especially the reefs. As a result this dependency has caused exploitation on these reefs. Moreover, the locals are highly competitive in using natural resources, thus leads to unsustainable destruction of reefs such as destructive fishing by using bombs and potassium cyanide to get bigger yield. Net Benefits to Individuals Net Losses to Society Function Total Net Benefits Fishery Coastal Protection Tourism Others1/ Total Net Losses (quantifiable) Threat Poison Fishing 33 40 0 3-436 n.q. 43-476 Blast Fishing 15 86 9-193 3-482 n.q. 98-761 Coral Mining 121 94 12-260 3-482 672/ 176-903 Sedimentation-logging 98 81 - 192 n.q. 273 Sedimentation-urban n.q. n.q. n.q. n.q. n.q. n.q. Overfishing 39 109 - n.q. n.q. 109 (present value; 10% discount rate;25y. time-span; in US$ ,000; per km (http://www.unesco.org/csi/pub/papers/mega8.htm) Figure 3 above shows the total net benefits and losses associated with the jobs that directly or indirectly contribute to the destruction of coral reefs in the Thousand Islands. This figure shows conflict between private profit and public loss by showing the estimated benefits to individuals against the losses to society for each square kilometer of coral reef left unprotected. These benefits that the local individuals gain from destructing the coral reefs causes much more loss to the society as they affect all of the local community as well as the ecosystem surrounding these coral reefs. ...read more.

Thus, towards these ends, the education and cooperation of people throughout The Thousand Islands and in Indonesia is necessary for the sake of our coral reefs. Therefore, we can also incorporate possible solutions for these destructions of coral reefs in our daily lives such as the 3R's to lessen the number of waste and garbage that drains into the sea as all of this water pollution, in different forms, passes through the sea to the waters of the Thousand Islands, which cause damage to the coral reefs. This is because we are also indirectly destructing these coral reefs. Lastly, the ones who are aware should spread this environmental awareness, thus as tourists also, we can act environmentally friendly when visiting tourism places. In conclusion, many anthropocentric factors are causing coral reef destructions and this will have an effect on the loss of the surrounding ecosystem a reefs are home to over 4,000 species of fish, 700 species of coral and thousand other forms of plant and animal life and this estimates to more than 1 million species of plants and animals are associated with the coral reef ecosystem. Moreover, it will also impact the people with diseases that are helped by these coral reefs. The beaches will also lose protection when coral reefs are destructed. Furthermore, it will also affect the local economy of the country. This includes the displaced people from islands, tourism, as well as tax revenue. Thus, we should take action in this environmental issue because losing coral reefs will have a huge impact on the world today especially in the Thousand Islands. ...read more.