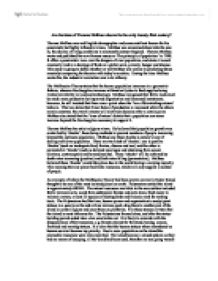 Are the ideas of Thomas Malthus relevant to the early twenty-first century?

Are the ideas of Thomas Malthus relevant to the early twenty-first century? Thomas Malthus was and English demographer and economist best known for his pessimistic but highly influential views. Malthus was concerned about what he saw as, the decline of living conditions in nineteenth century England. Thomas Malthus wrote and published his now famous essay on 'The principle of population' in 1798. It offers a pessimistic view over the dangers of over population, and states it would eventually lead to a shortage of food on a global scale, poverty, hunger and disease. This essay is going to define whether or not Malthus was correct in predicting future events by comparing his theories with today's societies. During the time Malthus wrote this, the industrial revolution was in its infancy. The Malthusian Theory states that the human population increases in a geometric fashion, whereas food supplies increase arithmetically due to food supplies being limited availability in land and technology. Malthus recognised that fertile land could be made more productive by improved organisation and increased investment; however, he still insisted that there was a point when the 'law of diminishing returns' kicks in. ...read more.

An example of where the Malthusian Theory had been proven correct is Easter Island, thought to be one of the most isolated places on earth. Polynesians settled the island in approximately 400AD. The natural resources available to the new settlers included fertile volcanic soils, wood from subtropical forests and palm trees, fresh water in volcanic craters, at least 25 species of nesting birds and volcanic rock for making tools. The Polynesians had the time, human power and organisation to sculpt giant statues in a quarry on the side of one volcano peak, drag them to another part of the island in coastal regions and erect them on platforms. It is these statues or Moai that the island is most infamous for. The Polynesians formed clans, and after the statue-building period ended inter-clan wars broke out. It is likely to coincide with the disappearance of key resources, e.g. forests cleared for farmland, hosing, canoes, firewood and moving statues. It is clear that the human statues where abandoned as human survival became top priority. ...read more.

Their aim: to research into world population issues. They studied the effects and limitations of continued world growth, using a large-scale computer model to simulate the behaviour of the world and forecast. Five variables were used, they were: population growth; food per capita; industrial output; resources and pollution. Their theory states, 'If the present growth trends in world population, industrialisation, pollution, food production, and resource completion continue unchanged, the limits to growth on this planet will be reached sometime in the next hundred years. The most presumable result will be a rather sudden decline in both population and industrial capacity'. The Malthusian has one major failure, the failure to foresee the immense technological innovation that was to occur. The 'Club of Rome's' theory has been criticised on the same basis. The ability of market forces to adjust to supply and demand were not considered. The model ignored the human ability to develop new and sustainable methods of production. However some agree with the basic idea of the model. They claim that even with the best technology and resource management, there are still limits to the numbers of people that can be supported by the resources available in a geographic region. ...read more.