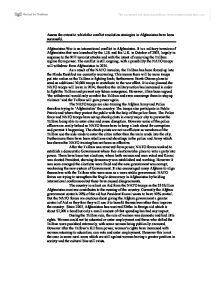 Afghanistan War is an international conflict in Afghanistan. It is a military invasion of Afghanistan that was launched by the U.S. and the U.K. in October of 2001, largely in response to the 9/11 terrorist attacks and with the intent of removing the Taliban regime from power. The conflict is still ongoing, with a possibility the NATO troops will withdraw from Afghanistan in 2014.

As a result of the NATO invasion, the Taliban has been forced up into the Hindu Kush but are currently recovering. This means there will be more troops put into action as the Taliban is fighting back; furthermore Barak Obama plans to send an additional 30,000 troops to contribute to the war effort. It is also planned the NATO troops will leave in 2014; therefore the military action has increased in order to fight the Taliban and prevent any future resurgence. However, it has been argued ‘the withdrawal would only comfort the Taliban and even encourage them to step up violence’ and the Taliban will gain power again.

The NATO troops are also training the Afghan Army and Police therefore trying to ‘Afghanistize’ the country. The troops also participate in Public Patrols and where they protect the public with the help of the police force. The Police force and NATO troops have set up check points in every major city to prevent the Taliban being able to enter cites and cause disruption. However some of the police officers are easily bribed so NATO forces have to keep a look about for corruption and prevent it happening. The check points are not as efficient as members of the Taliban use the side roads to enter the cities rather than the main roads into the city. Furthermore there have been rebellions and shootings in the police and Army which has shown the NATO training has not been as effective.

After the Taliban was removed from power, NATO forces worked to establish a democratic Government where free elections take place to vote a party into power. There have been two elections, where both women and men voted and Karzai was elected President, showing democracy was established and working. However it was soon emerged the elections were fixed and the new government was corrupt, weakening the new system of Government. It also encouraged many Afghans to align themselves with the Taliban who were seen as a more stable government. NATO forces are trying to strengthen the fragile democracy in Afghanistan by holding international conferences but these have caused disagreements.

The country is reliant on Aid from the NATO troops as the $10 billion Afghanistan receives contributes to the running of the country. Currently the Afghan government controls 20% of the aid but President Karzai wants to have 50% control. But the NATO forces are cautious about giving the Afghan government a greater control of Aid as they fear they will use it to benefit themselves rather than improve the country.  Since 2001, Afghanistan has received $36bn in foreign aid which is about $1,200 a head but only a small amount of that spending has had any impact.

During the Taliban rule, the role of women was domestic and had little rights. Women could not be educated or enter employment and those who defied the Taliban were punished extremely, with some women being publically executed. However after the Taliban’s fall from power, women’s rights have increased with women returning to education, can vote and enter employment. However this is not the case in some rural areas which are still against women having a greater position in society and the cultural bias still exists.

Education has greatly improved in Afghanistan since 2001, where more than 5.4 million children returned to school with nearly 35% of them girls. However it is still estimated 11 million Afghans are still illiterate. Many schools lack funding so have poor facilities and the number of qualified teachers is low and cultural bias that many Afghans have against educating women still needs to be overcome.

As a result of the conflict in Afghanistan, much of the infrastructure was destroyed, but there is work being done to rebuild buildings, improve infrastructure and introduce new industry so generating employment and improving the economy.

To an extent the conflict resolution strategies in Afghanistan have been successful as they have benefitted the local people such as improving the standard of living, improving education and the position of women. There is a democratic Government established with free elections taking place. However there have been some problems for example corruption in the Government and rigged elections. The plan for troops to leave in 2014 has caused the NATO forces to speed up the process of trying to ‘Afghanistize’ the country. However the Taliban still has some influence in some areas and many warn after the withdrawal of the troops, the Taliban will be able to return to power and the past decade of war would have been wasted.