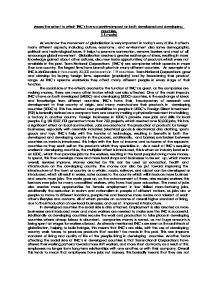 Assess the extent to which Trans National Corporations (TNCs) have a positive impact on both developed and developing countries. (15 marks)

Assess the extent to which TNC's have a positive impact on both developed and developing countries. (15 marks) As we know the movement of globalization is very important in today's way of life. It affects many different aspects, including culture, economy, and environment also some demographic, political and technological issues. It helps to promote connection, remove barriers and most of all encourage global movement. Globalization creates a greater exchange of ideas, resulting in more knowledge gained about other cultures, also new trade opportunities, of products which were not available in the past. Trans National Corporations (TNC's) are companies which operate in more than one country. The largest firms have branch plants in many different countries. An example of a TNC is McDonalds; it has nearly 30,000 restaurants in 119 countries. Trans National Corporations grow and develop by buying foreign firms, expansion (popularity) and by broadening their product range. As TNC's operate worldwide they affect many different people in every stage of their function. The social side of the effects creates by the function of TNC's is great, as the companies are making money, there are many other factors which are also affected. ...read more.

Linked with this is that TNC's help to develop mineral wealth in countries that might not otherwise be able to capitalise on local resources, this could be diamonds in Africa, more money will be made by selling the product abroad, as it is not something commonly sold. For the large amount of workers in LEDC's working for TNC's, wages are not as high as they would be in the country of TNC origin, however they are much higher than any local rates. This is a large benefit to the economy as people will have more money, can pay more money for taxes; this also links with the multiplier affect. More local businesses being set up this also results in more money being fed into the economy. Due to the increase in jobs in developing countries, workers are taught new skills which mean more jobs can be fulfilled. This brings capital, modern technology and skills which the country does not have. New local businesses can be set up, providing the economy with more money; also these new skills can be used to improve the standard of living of many people. ...read more.

Another important point benefiting the economy of the MEDC, is that in the developing country there is often cheap land as the area is declining in local businesses, so governments want to persuade TNC's to invest in the country, to boost their own economy. To conclude, it is clear that TNC's have very strong positive effects on both developing (LEDC) and developed countries (MEDC). The benefits of the MEDC's are largely based on the investment they place in the LEDC, and how little is required to run a business in a developing country, due to cheap labour and the governments offering low taxes etc, simply to get the business to use their country. The benefits of the developed countries I would say would be seen as 'sly', they benefit largely when others benefit a little in comparison. The positive effects on the developing countries, is that overall they receive a much needed economy boost, a cycle is created where people receive more money, then more businesses can be set up. Benefits created by TNC are different on both LEDC and MEDC countries, developed countries positive effects are largely focussed on income, money and success rate. However that of the developing countries is in a basic way of description, based on improving the standard of living and quality of life of its people. ...read more.