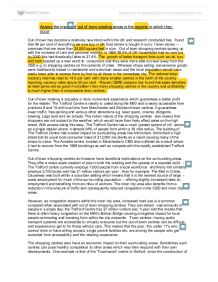 Assess the impact of out of town retailing areas in the regions in which they occur Out of town has become a relatively new trend within the UK and research conducted has found that 48 per cent of everything we now buy in UK food stores is bought in out of town stores - premises that are more than 25,000 square feet in size. Out of town shopping centres sprang up with the increase of cars and personal mobility: in 1960 39.5% of UK households had no cars but by 2000 this had drastically fallen to 27.4%. The growth of better transport links such as rail, bus and tram opened up a new world to consumers and they were more able to travel away from the CBD e.g. to shopping centres on the outskirts of cities. Whereas shops selling convenience goods were traditionally based in residential and suburban areas and the local population would have easily been able to access them by foot by all those in the immediate city. The national shop vacancy rate has risen to 14.5 per cent with many smaller centres in the north of the country reporting vacancy rates above 30 per cent - ...read more.

The Arndale centre, located in Manchester's CBD also suffered as a result where it had to recover from the 1996 bombings as well as compete with the rapidly established Trafford Centre. Out of town shopping centres do however have beneficial implications on the surrounding areas. They offer a mass-scale creation of jobs in both the retailing and the upkeep of a sizeable build - The Trafford centre currently employs 7,000 people from a local workforce and Merry Hill similarly employs 2,700 locals and has 21 million visitors per year. Also for example, The Mall in Cribbs Causeway was built within a suburban setting which means that it is the nearest source of large-scale employment for much of the surrounding population - offering slightly increased rates on employment and benefiting from an influx of workers. The inner city area also benefits from a reduction in the amount of traffic and consequently reduced congestion in the CBD and inner city areas. However, as congestion lessens within the inner city area, increased road use is a common complaint often associated with out of town shopping centres. ...read more.

Overall, out of town retailing has both its benefits and its drawbacks; they bring wealth and job opportunities that provide easily accessible employment on a large scale in a sector that remains the fastest growing sector of all retailing formats. Impacts for consumers generally consist of positive ones; they get to walk around out of the weather in an area that's easier to access than the CBD, benefit from lower cost parking because of the vast parking space and evidence shows that 24% of the Trafford Centre visitors visit once a week and just under 40% visiting once or twice a month. However, they can similarly take away wealth from an area (inner-city mostly) and provide even greater traffic congestion on a larger scale than the CBD but just on the outskirts of town and on Greenfield sites in the countryside. This often means pollution, loss of habitat, farmer's land being split by new roads to support the shopping centre and damage to the countryside. The encouragement of such centers has had an effect urban sprawl and the eventual loss of large areas of open space and country side will inevitably result in the decline of 'green suburbs'. ...read more.

Overall this is a reasonable attempt at the question. It outlines some of the impacts of out of town retailing and includes some relevant case study material. It has a regional focus as required by the question. It could be improved by having a clearer definition of out of town retailing, and by being more consistent in classifying impacts into social, economic and environmental. Some ideas in the conclusion would benefit from further consideration earlier in the answer.