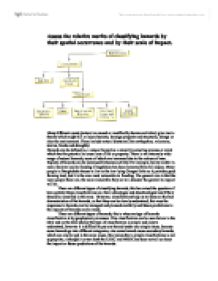 Assess the relative merits of classifying hazards by their spatial occurrence and by their scale of impact.

Assess the relative merits of classifying hazards by their spatial occurrence and by their scale of impact. Many different events (natural or caused or modified by human activities) give rise to threats which might kill or injure humans, damage property and structures, change or alter the environment. These include natural disasters (like earthquakes, volcanoes, storms, floods and droughts). Hazards can be defined as, a natural hazard as a naturally occurring process or event which has the potential to cause loss of life or property. There is an extremely wide range of natural hazards, some of which are increased due to the actions of man. Impacts of hazards can be increased by human activity. For example, heavy rainfall is more likely to lead to flooding if vegetation has been removed from hill slopes. Many people in Bangladesh choose to live in the low-lying Ganges Delta as it provides good farming land, but it is the area most vulnerable to flooding. The general rule is that the more people there are, the more vulnerable they are to a disaster the greater its impact will be. There are different types of classifying hazards, this has raised the question of how suitable these classifications are, their advantages and disadvantaged and if they should be classified in this way. ...read more.

literally 'blew its top' in a violent explosion that was heard 2,000 km away in Australia. It threw an estimated 20 km3 of rocks and soil high into the atmosphere. Most fell as ash over an area of about 70,000 km2, but some was blown literally round the world. Exotic red sunsets throughout the world were being attributed to the volcanic dust in the atmosphere for many years after the event. The explosion also triggered off a giant sea wave (tsunami) 40 m high, which drowned over 36,000 people in coastal towns on nearby Java and Sumatra, and could be detected on tide gauges as far away as the English Channel. Krakatoa was the most powerful of the 5,567 recorded eruptions from 1.343 volcanoes active over the last 10,000 years. Between 1970 and 1986 50 to 70 volcanic eruptions a year occurred around the world. The two main types of classification that will be assessed thoroughly are; Spatial occurrence and scale of impact. This is to asses their importance and which one is a better classification for hazards. Spatial components of hazards are important, because it can affect the outcome of hazards. In 1994, an earthquake in Northridge, California occurred at 4:31 A.M, before roads were crowded with commuters; the death toll of 57 was probably much lower than it would have been hours later, this ...read more.

The Kashmir earthquake (also known as the South Asia earthquake or the Great Pakistan earthquake) of 2005 was a major earthquake. The earthquake occurred at 03:50:38 on 8 October 2005. The death toll was 73,276; most of the affected people lived in mountainous regions with access impeded by landslides that blocked the roads, leaving an estimated 3.3 million homeless in Pakistan. 4 million people were directly affected, prior to the start of the winter snowfall in the Himalayan region. It is estimated that damages incurred are over US$ 5 billion. The region where this earthquake occurred is not surprising since it is on four pate boundaries, figure 1.3. It is the scale of impact that caused the cost of the earthquake to be immense. This occurred in an LEDC country, where their perception of hazard is relatively low. Also the loss of lives and the primary industry affected it what questions if spatial occurrence is a better classification of hazards. As seen in previous case studies, the scale of impact in an MEDC country, regarding loss of lives is lower, than that of the LEDC. Spatial occurrence does not show the impacts of the hazards expect for where they occur, and it does not fit the definition of an hazard if man-made hazards are regarded. However, scale of impact relates more to the definition of hazards, and shows variations between the countries at different stages of development. ...read more.