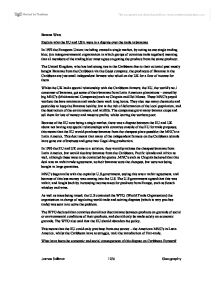 Banana Wars Explain why the EU and USA were in a dispute over the trade in bananas In 1992 the European Union; including created a single market, by acting as one single trading bloc, (an intergovernmental organization in which groups of countries trade together) meaning that all members of the trading bloc must agree on getting the produce from the same producer. The United Kingdom, who has had strong ties in the Caribbean due to their colonial past mostly bought Bananas from the Caribbean via the Geest company, the producers of Bananas in the Caribbean are just small independent farmers who relied on the UK for a flow of income for them Whilst the UK had a special relationship with the Caribbean farmers, the EU, the world's no.1 consumer of bananas, got some of their bananas from Latin American plantations - owned by big MNC's (Multinational Companies) such as Chiquita and Del Monte. These MNC's payed workers the bare minimum and made them work long hours. They also use many chemicals and pesticides to keep the Bananas healthy, but at the risk of deformation of the local population, and the destruction of the environment, and wildlife. ...read more.

The WTO also said that the EU should abandon the policy. This meant that the EU could only purchase from one source - the American MNC's in Latin America, whilst the Caribbean have to struggle, until the introduction of Fair-trade. What have been the economic and social consequences of this dispute on Caribbean Farmers? Because of the WTO's decision stating that the EU should only purchase bananas from MNC's in Latin America, Caribbean farmers have lost massive amounts of money from not selling bananas to the UK because of the special relationship they had. Before the Banana wars, the Caribbean Windward islands used to export 76,000 tonnes of banana's a year around the world, it was a major income for the island; but now the EU cannot purchase bananas from the Caribbean, the number of the crop being exported has halved. Because of the banana industry falling in the Caribbean, many farmers are getting in debt, and losing their land and their businesses, causing mass unemployment on the already incredibly poor islands. Some of the banana farmers have begun to use a different crop to make money; Marijuana, an illegal substance, which as some sources say, 30% of farmers on the Windward Islands are growing. ...read more.

water for the communities of Latin America; this creates huge issues for the ecosystem and biodiversity of the area, affecting every animal in the food chain, from fish, and eventually to man. Because of the deforestation to make way for banana plants, there is an increased amount of erosion on the soil; the rain will wash away the soil with ease. Explain the difference between free trade and fair trade. There are two types of trade, Fair trade and Free trade, Free trade is a type of trade which does not involve governmental interference, most of the worlds trade is free trade, The WTO is very pro-free trade as it does not create as much disputes as other trade agreements do, which involve governments. In free trade many consumer states use the countries who produce products cheaply rather than the ones who are more expensive (such as Latin America plantations and the Caribbean farmers). Fair trade is a trade movement which aims to help producers in developing countries, promoting sustainability; we pay more for fair trade products, but the producers receive much more than they would in free trade. ?? ?? ?? ?? James Sullivan 12/6 Geography ...read more.